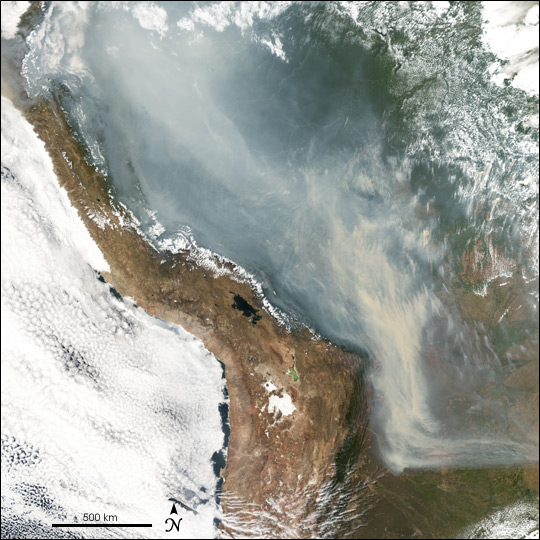 A thick veil of smoke covered much of South America on September 14, 2004, as intense fires continued to burn in western Brazil, Paraguay, and Bolivia. Such widespread fires are not natural in the humid, tropical environment, and these were probably started to clear land for agriculture. As this image demonstrates, local agricultural fires can have a long reach. The smoke inhibits cloud formation and rainfall, which can impact a large area. In this case, the smoke is drifting northwest along the east side of the Andes Mountains, traveling well over a thousand kilometers from its point of origin. To learn more about the effects of fires in the Amazon, please read “From Forest to Field: How Fire is Transforming the Amazon.” To learn more about the impact of smoke on clouds and the energy balance of the Amazon, please read “Clouds are Cooler than Smoke.”

This image was acquired by the Moderate Resolution Imaging Spectroradiometer (MODIS) on both the Aqua and the Terra satellites. The image is a mosaic of five separate granules (the data collected during a five minute period), and as such, shows a much larger area than a single MODIS scene. The large image provided above has a resolution of 500 meters per pixel. A closer view of the fires taken during a single Aqua overpass is available from the MODIS Rapid Response Team.

See also Fires Near Xingu River for more images of the biomass burning that has been ongoing in this region for more than two months.

Fires in central South America have been intense in 2004, particularly along the border between Bolivia and Brazil. This MODIS image from October 7, 2004, shows fires and thick smoke over the region.