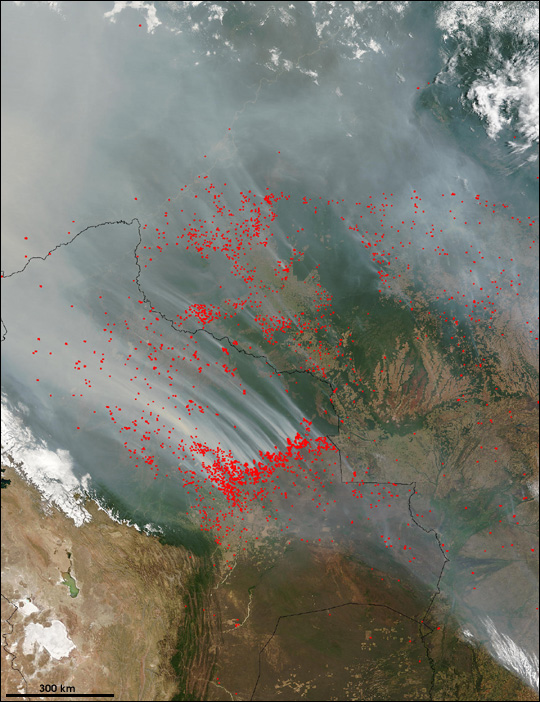 Biomass burning along the border between Bolivia (left) and Brazil (top and right) has been intense and widespread for more than two months. This true-color image acquired on September 13, 2004, by the Moderate Resolution Imaging Spectroradiometer (MODIS), aboard NASA’s Terra satellite, shows a large number of fires (red dots) are still burning, producing a thick pall of smoke that obscures the landscape over much of central South America.

Such large-scale burning in the Amazon Rainforest is not a natural occurrence, and the forest is not well adapted to fire, unlike the pine- and fir-dominated forests of the western United States. As people use slash-and-burn deforestation to create new farmland, the impacts are felt far beyond the location of the fire. The smoke inhibits cloud formation and rainfall, and causes the rain that does fall to come down in heavier outbursts. Fires escape control and invade managed timber plantations, undisturbed forest, and permanent agriculture.

See also Fires Near Xingu River for more images of the biomass burning that has been ongoing in this region for more than two months. To learn more about the effects of fires in the Amazon, please read “From Forest to Field: How Fire is Transforming the Amazon.” To learn more about the impact of smoke on clouds and the energy balance of the Amazon, please read “Clouds are Cooler than Smoke.”

The high-resolution image provided above is 250 meters per pixel in spatial resolution. The MODIS Rapid Response System also provides this image at additional resolutions.

Fires in central South America have been intense in 2004, particularly along the border between Bolivia and Brazil. This MODIS image from October 7, 2004, shows fires and thick smoke over the region.