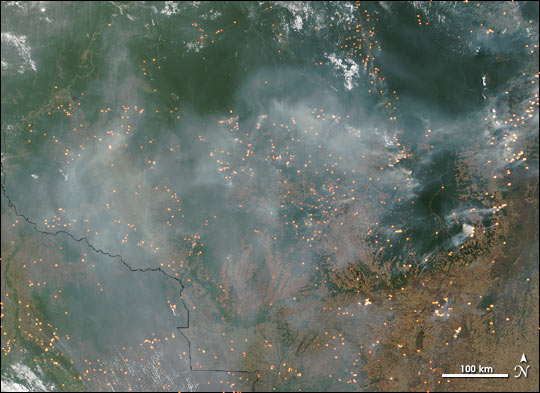 In central South America, at the border of Mato Grosso State, Brazil (top), and Bolivia (bottom left) numerous fires were choking the skies with smoke on September 6, 2004, when the Moderate Resolution Imaging Spectroradiometer (MODIS) on NASA’s Terra satellite captured this image. Actively burning fires MODIS detected during the overpass are marked in yellow.

To the right of image center, a small swath of green hangs down from intact rainforest to the north. This remnant of forest is the Xingu National Park and Indigenous Peoples Reserve, a place the Brazilian government has set aside for several native Amazon tribes, in an effort to allow them to continue their traditional hunter-gatherer or subsistence farming way of life in the midst of the progressive transformation of the Amazon rainforest into a developed landscape. In this scene, it appears that the preserve is surrounded on all sides by fire, including a line of fires that runs along the park's western boundary and extends northward along a new road that penetrates deep into the forest.

Such large-scale burning in the Amazon Rainforest is not a natural occurrence, and the forest is not well adapted to fire, unlike the pine-and-fir-dominated forests of the western United States. As people use slash-and-burn deforestation to create new farmland, the impacts are felt far beyond the location of the fire. The smoke inhibits cloud formation and rainfall, and causes the rain that does fall to come down in heavier outbursts. Fires escape control and invade managed timber plantations, undisturbed forest, and permanent agriculture.

The high-resolution image provided above is 1-kilometer spatial resolution per pixel. The MODIS Rapid Response System provides this image at additional resolutions.

In South America’s Amazon River Basin, the annual dry season is drawing to a close, but fires are still burning over a wide area near the Xingu National Park on September 28 and 29, 2004.