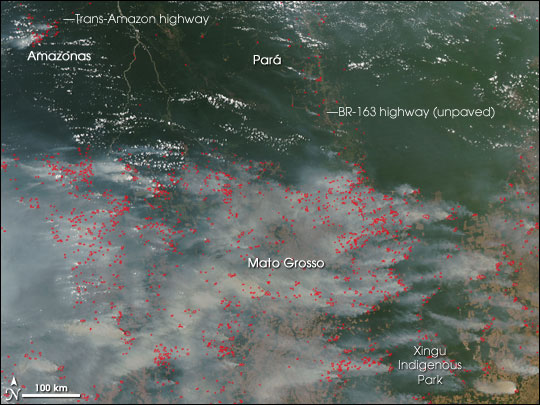 On September 29, 2007, the Moderate Resolution Imaging Spectroradiometer (MODIS) on NASA’s Aqua satellite captured this image of the southern Amazon, showing widespread fires (locations marked in red) in the state of Mato Grosso, Brazil. Fires are also clustered along the sides of two major roads that penetrate the heart of the Amazon: the Trans-Amazon highway in the state of Amazonas, and the unpaved portion of the BR-163 Highway in the state of Pará. (The paved portion extends through Mato Grosso.) Fires surround the Xingu Indigenous Park and line the banks of the river that meanders north through the park’s center.

Fires in Amazon Basin occur for a variety of reasons, nearly all of which are the product of human activity. People use fires to clear rainforest for agricultural land, and they set fires to clear brush from already established pasture or cropland. Also, it is not uncommon for agricultural fires to get out of control and to invade adjacent forest. Fires have been pervasive across South America throughout September 2007.

Because the Amazon forests are not adapted to fire (unlike grasslands or forests of the western United States, Canada, and Russia), accidental fires can initiate a cycle of degradation in which the risk of more severe fires in the future increases dramatically. Some scientists caution that selective logging and accidental fire may transform large areas of forest along the southern margin of the Amazon into savanna. For more on this topic, please read the feature story From Forest to Field: How Fire Is Transforming the Amazon.

Fire in the Xingu River Basin