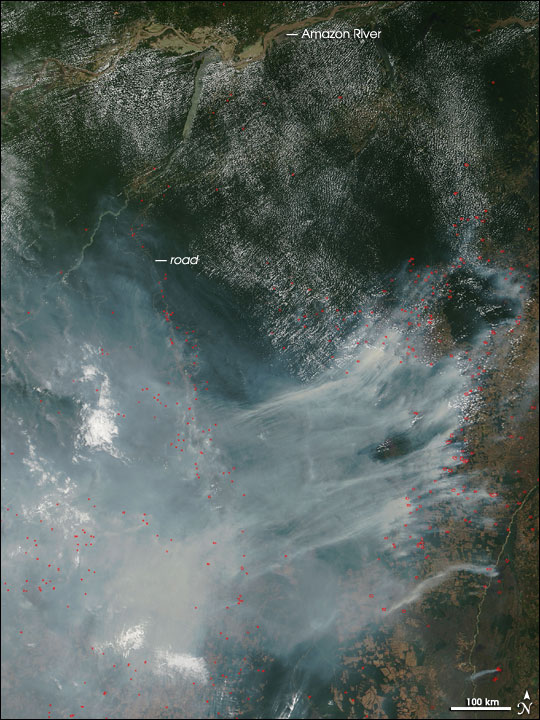 In southeastern Brazil, the annual fire season was clearly underway on August 24, 2005, when this image was captured by the Moderate Resolution Imaging Spectroradiometer (MODIS) on NASA’s Terra satellite. Hundreds of fires in the southeastern Amazon Rainforest and the more savanna-like region along the perimeter were churning out a cloud of smoke that blanketed the scene. Active fires detected by MODIS are marked with red dots.

Unlike some forests, such as the boreal forests of North America and Russia, the Amazon rainforest almost certainly did not experience an annual “fire season” before human influence became widespread. Today, however, people set fires in the Amazon to create and maintain farm or rangeland, for timber harvesting, and to build roads and settlements. Though many fires are intentional, others occur when fires that people set near forest margins escape control.

The high-resolution image provided above has a spatial resolution of 500 meters per pixel. The MODIS Rapid Response System provides this image at additional resolutions.

In the southeastern Amazon, biomass burning is transforming the landscape. Fires were burning along the margins of the forest and roads in July and August 2005.