Fire in the Xingu River Basin 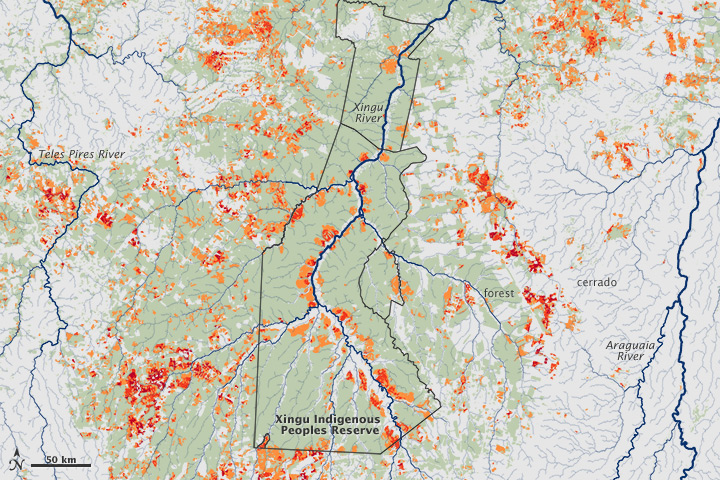 When most people think of the Amazon rainforest, they envision a vast expanse of green jungle, dripping with moisture year round. Some parts of the Amazon do receive relentless rain, but other regions have a distinct dry season when little or no rain falls.

The southeastern Amazon, in the Brazilian states of Mato Grosso and Pará, has a four-to-five month dry season that limits rains to a trickle. Lush vegetation survives by sending roots up to 10 meters (30 feet) into the ground. Ecologists worry that as climate change brings hotter, drier conditions to the region, the southern edge of the Amazon could easily transition from forest to tropical savanna known in South America as the Cerrado.

The boundary between rainforest and the Cerrado cuts across the Amazon Basin in a ragged line that runs through the Brazilian states of Rondônia, Mato Grosso, and Pará. The boundary has emerged as one of the most interesting parts of the Amazon to study because it is at this forest frontier where the needs of modern Brazilian society—cleared land for farmers, ranchers, villages, and roads—come into direct conflict with those of the rainforest and the large populations of indigenous peoples who live within the forest.

Then there are the fires. Satellite and ground observations of the forest edge show evidence of what ecologists call “understory” fires—low-intensity blazes that creep along the leaf littler on the forest floor but never get hot enough to burn up through the canopy. Since the fires remain beneath the canopy, NASA satellites designed to monitor fire activity rarely detect understory fires (unlike those that release more energy, such as deforestation or agricultural management fires). But satellites can sense the subtle changes in the forest canopy in the wake of these understory fires, as the damaged vegetation slowly dies and new trees grow back.

Distinguishing between understory fire damage and other types of forest disturbance—such as selective logging and deforestation for agriculture—is not straightforward with satellite imagery, explained NASA scientist Doug Morton. In the last few years, Morton has worked out a new technique based on data from the Moderate Resolution Imaging Spectroradiometer (MODIS) sensor that makes it easier to distinguish understory fires from similar-looking forest disturbances.

The prevailing theory has been that deforestation and understory fires go hand in hand, because deforestation creates gaps in the rainforest canopy that dry out the forest floor. Surprisingly, Morton’s mapping found no correlation between understory fires and deforestation. In fact, even in areas with little or no deforestation—such as the large reserves in the Xingu River Basin set aside for Brazil’s indigenous people—the analysis detected very large understory fires, with some areas burning frequently.

The Xingu River Basin saw more forests with repeated burning than nearly anywhere else in the Amazon over the study period, with some areas facing four or more fires. As shown in the map above, the fires within the indigenous reserve were concentrated along the banks of the Xingu River; rivers are the main transportation network for indigenous groups in the Xingu basin, similar to other remote regions of the Amazon where roads are scarce or seasonally flooded. Amongst the farms and ranches on the forest frontier beyond the reserve, fires were also common but scattered more broadly.

“One of the things this research shows is that deforestation probably isn’t the key driver of understory fires we once thought it was,” said Morton. “The simple presence of people—indigenous or otherwise—along with hot, dry weather is all you need for large understory fires to burn along the southern edge of the Amazon.”

Morton’s next question: “Are the forests along the edges of the Amazon able to withstand all these understory fires or will we see a gradual transition from forest to savanna over time?”