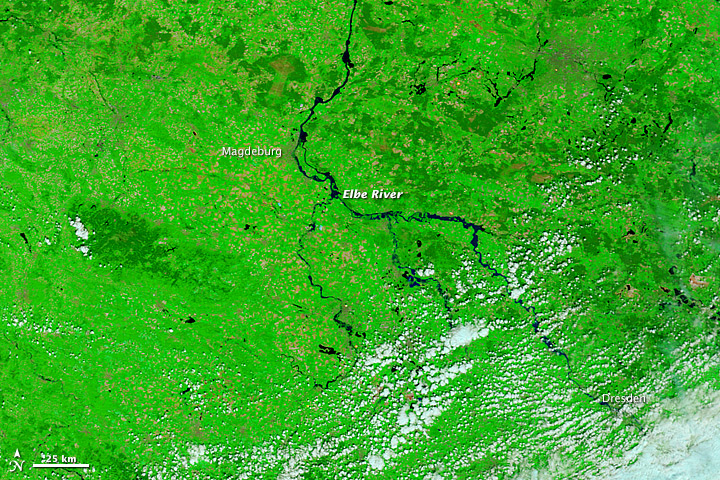 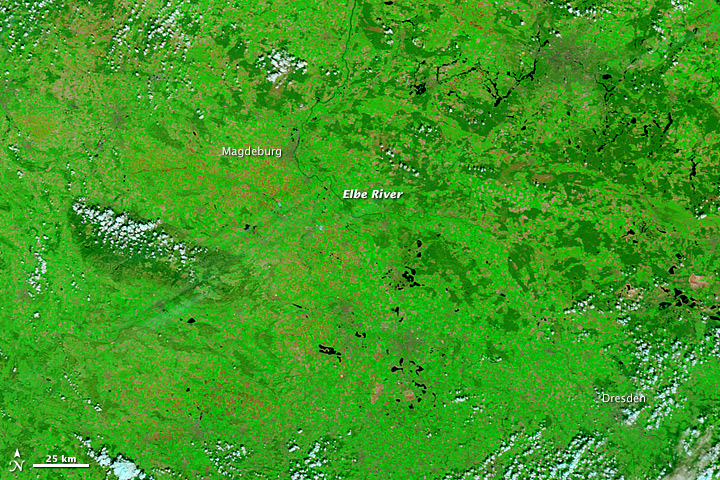 Unseasonably heavy rains brought serious flooding to Germany, Austria, and the Czech Republic in early June 2013. In some areas of eastern and southern Germany, the flooding was described as the worst since 2002. At least 16 people have died and thousands have been displaced. Further downstream along the Elbe, Vltava, and Danube Rivers, residents prepared for the rising water.

The Moderate Resolution Imaging Spectroradiometer (MODIS) on NASA’s Terra satellite observed flooding in central and eastern Germany on June 6, 2013 (top). For comparison, the lower image shows the same area on May 5, 2013. These false-color images use a combination of visible and infrared light to make it easier to distinguish between water and land. River water appears navy blue to black and vegetation is bright green. Clouds are pale blue-green and cast shadows.

On June 6, the Associated Press reported that floodwaters were cresting in Dresden, Germany, swamping much of the city but sparing the historic center. The Elbe River reached 8.76 meters (28.75 feet) that day in the area; the norm is 2 meters (about 6.5 feet).

Flooding had already peaked and left severe damage in the Czech Republic, northwestern Austria, and southern Germany, including Deggenfdorf, Passau, and Prague. However, satellite images of those areas have not been available due to persistent cloud cover. Visit NASA’s EOSDIS Worldview page and turn on the flood tool (under “my layers”) to observe false-color views of Germany and the rest of the world.

Unseasonably heavy rains produced the highest flood waters along the Elbe River since 2002.

Flooding in Germany and the Czech Republic