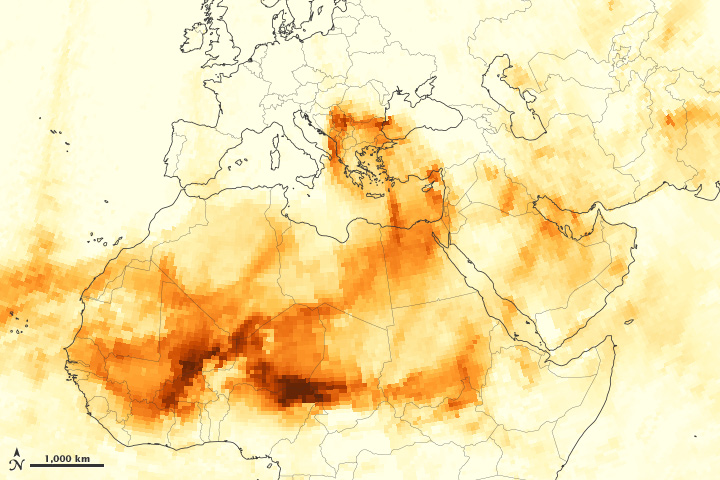 European history is sprinkled with references to episodes when rain or snow turned brown, yellow, and even dark red. So-called “blood rains” are mentioned by Cicero, Geoffrey of Monmouth, and writers throughout the Middle Ages. The events were often taken as dreadful omens that human suffering was imminent. When red rain drenched the Roman Senate in 191 B.C., Roman historian Livy described the response: “Being disturbed by these prodigies...the Fathers decreed that the consuls should sacrifice full-grown victims to whatever gods it seemed proper.”

Thousands of years later, red rains still occur periodically in Europe, though with less dramatic effect. They generally receive no more than a brief mention by a news outlet or a meteorologist because we now understand what causes them: strong storms picking up Saharan dust and lofting it toward Europe. Colored rain (or snow) occurs when dust plumes and storm systems meet, though only when raindrops fall through a dust plume beneath the level of the clouds.

Dust storms are common throughout the Sahara Desert. On May 29, 2013, the Ozone Mapping Profiler Suite (OMPS) on the Suomi NPP satellite captured this view of an expansive dust event in Africa and southern Europe. Plumes of dust stretched over Turkey, Greece, Albania, Montenegro, Serbia, and part of Bosnia-Herzegovina. Aerosol concentrations in the air are represented by a quantity known as the aerosol index, with the highest concentrations in deep red and the lowest in light yellow. The heaviest loads of dust appear to be emanating from near the Bodele Depression in Chad.

Dust storms that reach Europe are fueled by cyclones with marked seasonal cycles. The most intense dust events to affect the Eastern Mediterranean region usually occur in spring and early summer; by the end of summer, a low-pressure system often emerges over the Balearic Islands and pushes plumes toward the Western Mediterranean.

As seen above, not all of the dust kicked up in Saharan dust storms moves north. About 60 percent flows west toward the Atlantic, often drifting all the way to South America. Previous research has shown that about half the mineral dust that fertilizes Amazon soil originates in the Bodele Depression.

While dust can have severe impacts on air quality close to the source, dust from the Sahara is usually soaring at about 3 kilometers (2 miles) above the surface by the time it reaches Europe, explained NASA atmospheric scientist Colin Seftor. “It’s up so high that people on the ground aren’t really affected, though if they look up they may notice the sky looks a bit milky or opaque.”

However, what goes up must eventually come down. Gravity pulls dust earthward, and rain and snow accelerates the process. Colored rains occur when raindrops fall through dust plumes. Heavier rainstorms usually wash dust away before it is readily apparent, but brief, light showers can leave noticeable color across the landscape. Red rains only occur if dust particles contain enough iron oxide.

Dusty rains occurs throughout Europe, but they are most common along the shores of the Mediterranean Sea. Red rains are the rarest, but they still occur regularly. University of Arizona researchers have compiled a database with details of more than 500 events that have occurred since 1900. A few weeks before OMPS acquired this data, the Balkan Chronicle reported red rain in Bosnia-Herzegovina.

Saharan storms can send plumes of dust drifting north toward Europe. Precipitation helps pull the particles down, sometimes creating bizarre shades of rain and snow that have attracted attention for millennia.

Winds sent dust plumes swirling over the Mediterranean Sea on May 29, 2013. 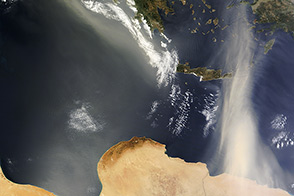