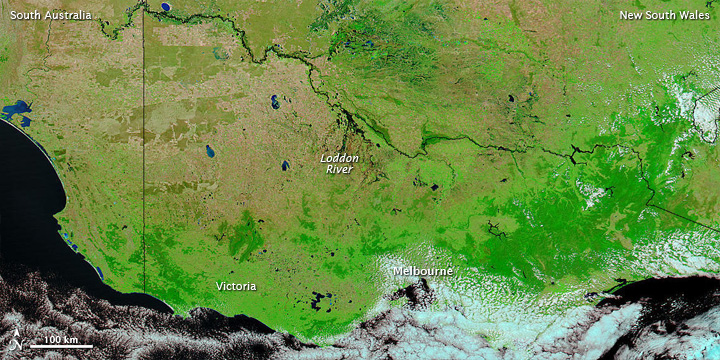 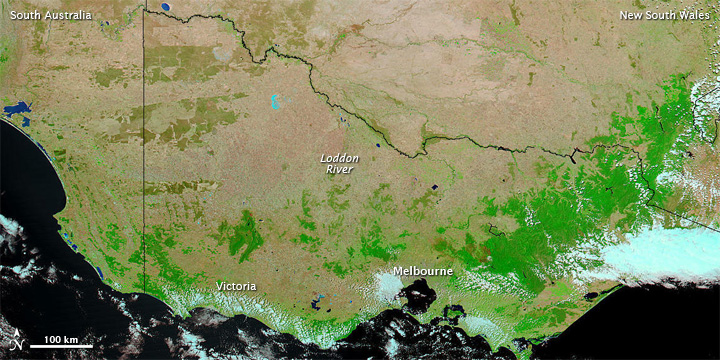 Heavy rains transformed southeastern Australia in early 2011, when floods that had plagued the north and eastern parts of the continent moved south. Tropical Cyclone Yasi exacerbated the already soggy conditions by bringing more precipitation to the state of Victoria in early February.

The Moderate Resolution Imaging Spectroradiometer (MODIS) on NASA’s Aqua satellite captured the these images on February 8, 2011 (top), and January 29, 2010 (bottom). Both images use a combination of infrared and visible light to increase the contrast between water and land. Water ranges in color from light blue to navy. Clouds range in color from pale blue-green to off-white. Vegetation is green. Bare ground is pink-beige.

Perhaps the most obvious difference between these images is the increase in vegetation across Victoria in 2011. Water levels have risen in lakes and rivers throughout the region, with numerous lakes appearing in 2011 that were not visible in 2010. Water levels around the Loddon River, although down from earlier levels, remained high in early February 2011.

ABC Australia reported flash floods across Victoria, with the northwestern part of the state suffering the most damage. Some Victoria residents experienced their fourth flood in recent months.

Acquired February 8, 2011, and January 29, 2010, these false-color images show southeastern Australia before and after flooding affected the region in early 2011.