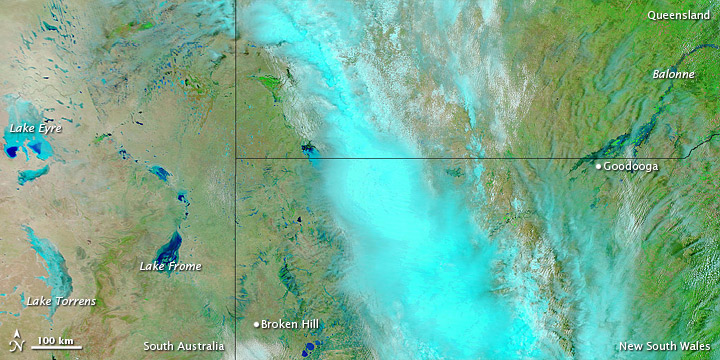 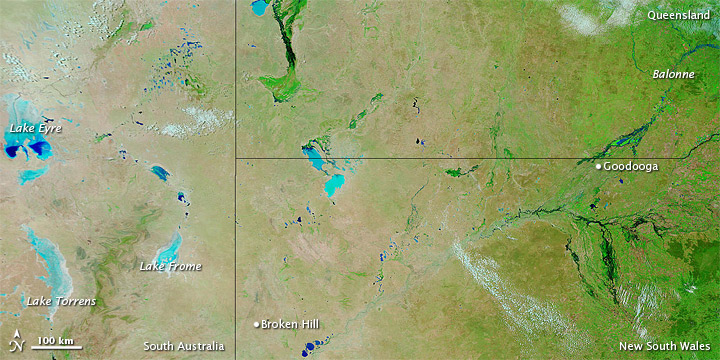 By mid-January 2011, residents of Brisbane were starting the long, slow process of cleaning up from some of Australia’s worst floods on record. Farther inland, the transformation of the landscape was also apparent.

The Moderate Resolution Imaging Spectroradiometer (MODIS) on NASA’s Terra satellite captured these false-color images on January 14, 2011 (top), and December 29, 2010 (bottom). Both images use a combination of infrared and visible light to increase the contrast between water and land. Water ranges in color from electric blue to navy. Clouds appear bright blue-green. Vegetation is bright green. Bare ground appears in shades of beige and tan.

Although a large cloud bank partially obscures the view on January 14, significant changes are apparent compared to December 29. As seen earlier, the Balonne River has swollen north of Goodooga, New South Wales. Just east of the New South Wales-South Australia border, areas of standing water surround Broken Hill. In South Australia, the colors of Lake Frome and Lake Torrens have deepened, suggesting higher water levels. North of Lake Eyre, a constellation of lakes appears that had not been visible weeks earlier.