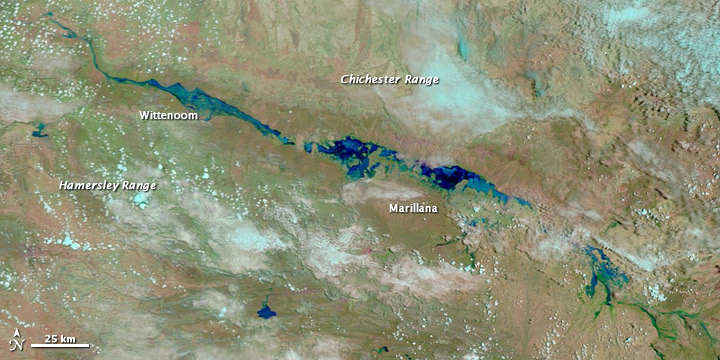 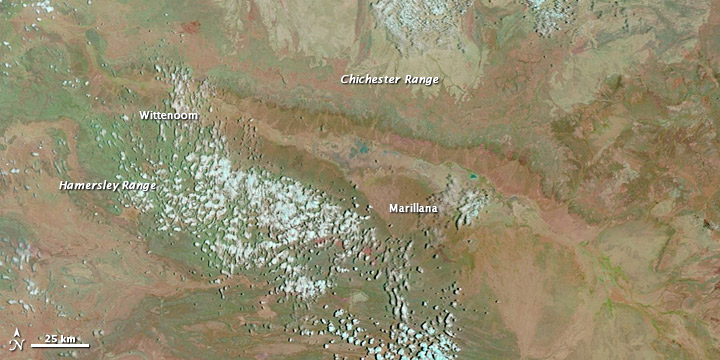 In the Pilbara region of Western Australia, between the Hamersley and Chichester Ranges, lies an impermanent river. It is part of the catchment of the Fortescue River, which flows toward the Indian Ocean. In January 2012, heavy rains from Tropical Cyclone Heidi filled the normally dry riverbed near the towns of Wittenoom and Marillana.

The Moderate Resolution Imaging Spectroradiometer (MODIS) on NASA’s Terra satellite captured these images on January 15, 2012 (top), and January 6, 2012 (bottom). Both images use a combination of visible and infrared light to better distinguish between water and land. Water ranges in color from electric blue to navy. Vegetation is green. Bare ground is earth-toned. Clouds are pale blue-green.

Separated by just nine days, these images show significant changes. The same river valley that is nearly dry on January 6 is filled with water on January 15. Besides watering ephemeral rivers, the storm hampered iron-ore production in Pilbara, according to news reports.