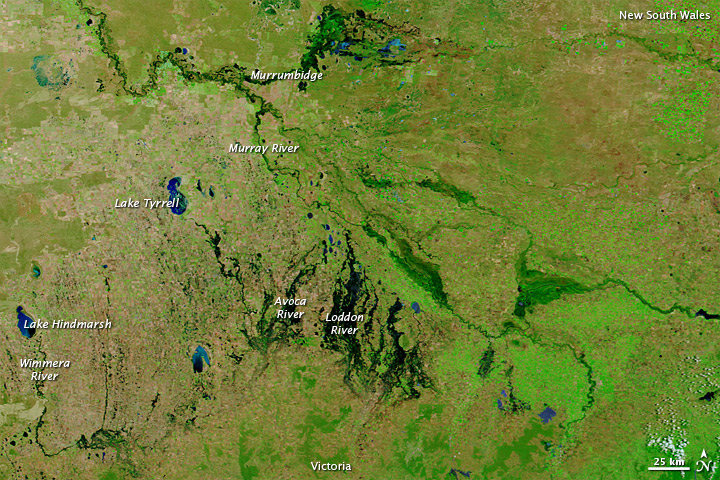 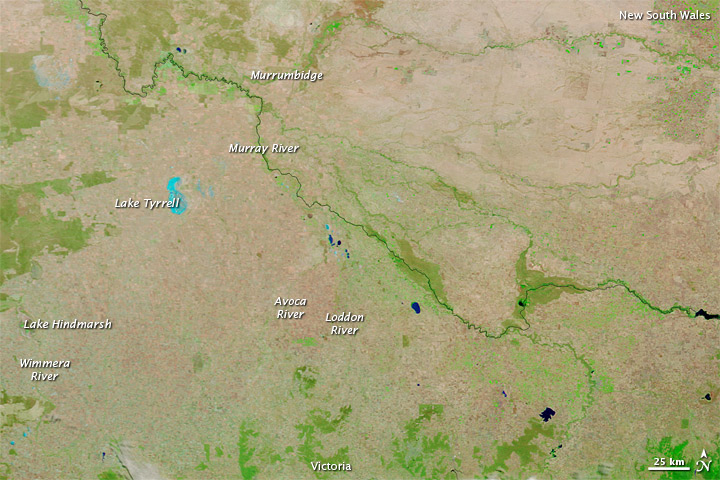 Australia’s Bureau of Meteorology issued multiple flood warnings for the state of Victoria on January 19, 2011, as flooding spread south from New South Wales. Meanwhile, the Herald Sun reported that the January 2011 floods were expected to cost the state of Victoria hundreds of millions of dollars, particularly in infrastructure damage and agricultural losses.

The Moderate Resolution Imaging Spectroradiometer (MODIS) on NASA’s Terra satellite captured the top image on January 19, 2011. MODIS acquired the bottom image roughly a year earlier on January 20, 2010. Both images use a combination of infrared and visible light to increase the contrast between water and land. Water ranges in color from light blue to navy. Vegetation is green. Bare ground is pink-beige.

The entire region is more vegetated in 2011, and multiple rivers have pushed over their banks. The Bureau of Meteorology warned of moderate flooding along parts of the Murray River, which marks the boundary between Victoria and New South Wales. The bureau also issued major flood warnings for the Avoca, Loddon, and Wimmera Rivers, all of which have spilled onto floodplains in the 2011 image.

Lake Tyrrell, a pale blue splotch in 2010, has deepened to navy in 2011. Other lakes, invisible in 2010, are dark blue in 2011. The deeper shades of blue likely result from higher water levels.

Besides widespread flooding in Victoria, the 2011 image shows floods in New South Wales. The Murrumbidge River, which passes through a marshy area en route to the Murray River, has transformed into a sprawling lake in 2011.

Acquired February 8, 2011, and January 29, 2010, these false-color images show southeastern Australia before and after flooding affected the region in early 2011.