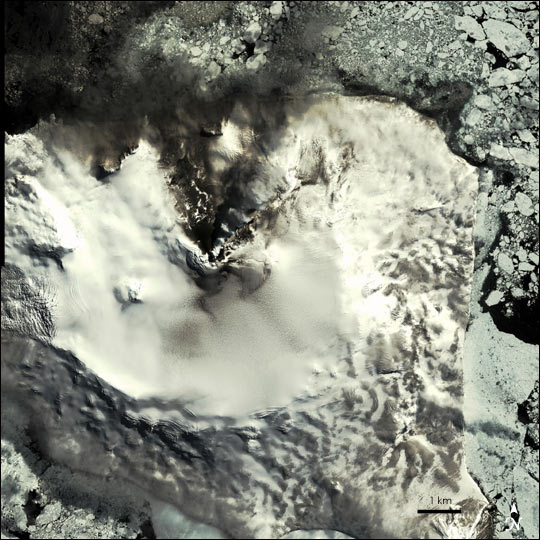 IKONOS captured this spectacular view of the ongoing eruption of the Mount Belinda volcano on Montagu Island, in the South Sandwich Islands of the Scotia Sea, some 250 kilometers from South Georgia Island. The South Sandwich Islands are situated approximately between the southern tip of South America and mainland Antarctica. Montagu Island is dominated by the long-dormant Mount Belinda stratovolcano, which rises 1370 meters above sea level. This volcano is totally ice-covered, and until late 2001, it was inactive, thereby accumulating a thick cover of ice and snow. However, as this image shows, the volcano began erupting in late 2001, spewing basaltic lavas that have melted the ice, producing a marvelous "natural laboratory" for studying lava-ice interactions relevant to the biology of extreme environments as well as to processes believed to be important on the planet Mars.

This image was acquired on October 1, 2004, and shows the steaming vent crater and dark, basaltic tephra covered ice surfaces to the north of the lavas which erupted down the northern flank of the Mt. Belinda stratovolcano. The steam plume is drifting toward the north, and light clouds surround the south side of the crater. White chunks of ice float in the ocean surrounding Montagu Island.

The full resolution version of the image shown above has a resolution of 4 meters per pixel, but IKONOS also acquired the image at 1 meter per pixel (3.20 Mb). Thanks to the 1-meter imaging capabilities of the IKONOS satellite, dynamic processes such as those on remote, uninhabited islands, can be monitored from orbit, thereby serving to target more intensive field studies when they are justified. As such, IKONOS imaging of localities such as active eruptions involving ice-lava interactions, represents a new form of scientific exploration of planet Earth.