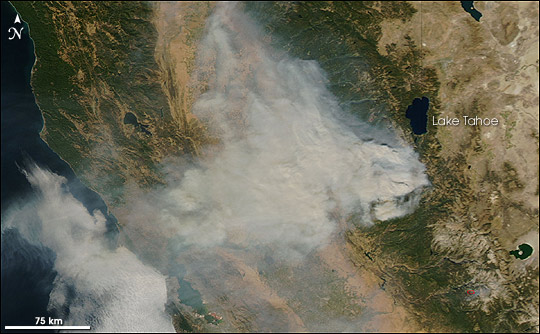 The combined smoke from the Freds and Power Fires in northern California southwest of Lake Tahoe was filling in the northern end of the Sacramento Valley on October 14, 2004. This image was captured by the Moderate Resolution Imaging Spectroradiometer (MODIS) on NASA’s Aqua satellite in the afternoon, when smoke had become so thick the actively burning areas of the fire that MODIS on the Terra satellite detected during its morning overpass could no longer be picked up.

Southwest of Lake Tahoe, the northernmost band of thick smoke is associated with the Freds Fire, while the central and southern ones are associated with the Power Fire. The smoke has risen far enough into the air to be casting a shadow onto another, thinner layer of smoke below. Smoke nestles into the ravines and canyons of the many rivers that run off the Sierra Nevada Mountains, causing them to stand out from the forested terrain.

Other landmarks in the scene include San Francisco Bay, along the bottom edge to the left of center; Clear Lake, in the upper left quadrant; the southern end of Nevada’s Pyramid Lake, at upper right; and the gray-colored rock of Yosemite National Park, to the west of Mono Lake at bottom right. A small fire was detected by MODIS in that area and is outlined in red.

The combined smoke from the Freds and Power Fires in northern California hung thickly in the Sacramento Valley on October 14, 2004. This image of the fires was captured by the MODIS sensor on the Aqua satellite. 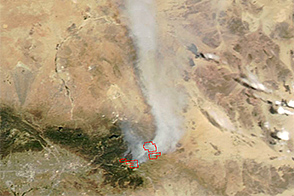