Red Plankton in the Arabian Sea 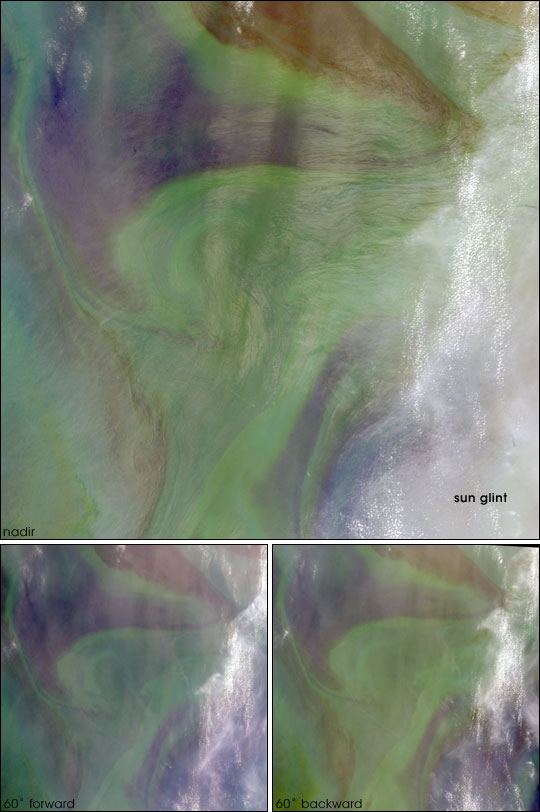 In the Arabian Sea, sunlight and nutrients fueled a startling occurrence of colorful phytoplankton and bacterial populations, which are captured in these natural-color images from NASA’s Multi-angle Imaging SpectroRadiometer (MISR). Several areas exhibit an unmistakably reddish hue, particularly in the upper portion of the images. The image set is centered along the Tropic of Cancer, about 400 kilometers east of Muscat, Oman, and was acquired on October 2, 2004. A view from MISR’s nadir (directly downward-viewing) camera is provided at the top, while the two smaller images at lower left and lower right are from MISR’s 60-degree-forward- and backward-pointing cameras, respectively.

The Arabian Sea is an unusual part of the world’s oceans because it is surrounded by land masses from three sides, and light levels in the region are strongly influenced by cloud cover generated by the Indian monsoons. Phytoplankton concentrations in the Arabian Sea tend to be highest during September and October, towards the end of the summer monsoon. The offshore drift of surface waters and their replacement by deeper, nutrient-rich waters means that the Arabian Sea is very productive, but such fertilization also sometimes results in copious phytoplankton production and oxygen depletion of the subsurface waters. Although red phytoplankton fluorescences have been associated with the low oxygen concentrations in the intermediate and deep waters of the Arabian Sea, the red pigment in this scene may instead be related to the dynamic processes of plankton grazing and decomposition.

Multiple observation angles allow oceanographers to study the color of surface ocean waters in great detail and to observe regions that can not be examined by satellite instruments that view nadir only and whose nadir view is affected by sun glint. Sun glint is a bright spot on the surface where the mirror image of the Sun appears, usually blurred and stretched by ripples and currents in the water. In these images, the ocean color in the lower right-hand corner is discernible at 60-degrees backward but not at nadir. Multiple angles also enable the observation of ship and cloud motion. The movement of several ships across the scene is illustrated in an animation. The oblique imagery used in this image set is part of the Local Mode data acquired during the Unified Aerosol Experiment United Arab Emirates (UAE2) field campaign.

The Multi-angle Imaging SpectroRadiometer observes the daylit Earth continuously and every 9 days views the entire globe between 82° north and 82° south latitude. These data products were generated from a portion of the imagery acquired during Terra orbit 25483. The MISR Browse Image Viewer provides access to low-resolution true-color versions of these images. The still image panels cover an area of about 240 kilometers x 240 kilometers, and utilize Local Mode data from within blocks 71 to 73 and within World Reference System-2 path 155.