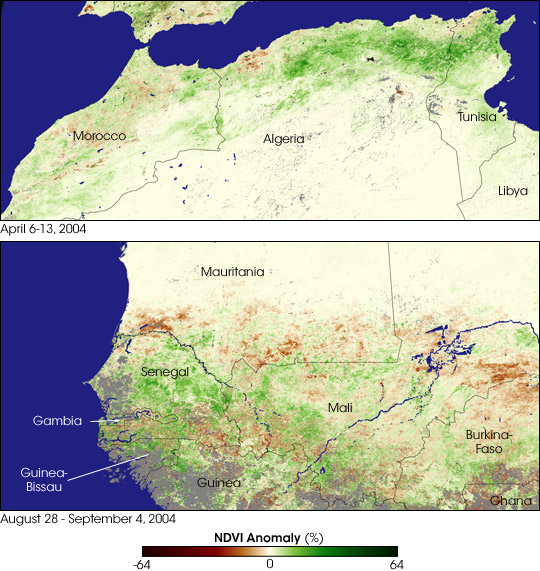 A wet winter and spring settled over northwestern Africa in 2004, and the dry Sahel bloomed with life. As the desert turned green, the plentiful water nourished more than vegetation. Buried in the sandy soils were the eggs of desert locusts, waiting to absorb moisture and hatch. This year, there was enough water and vegetation to support large populations of young locusts, and by late summer, several large swarms had developed.

Swarms of locusts can contain as many as 80 million locusts per square kilometer, and may cover several square kilometers. An adult locust can eat its own weight in food every day, about two grams, which means that, according to the Food and Agriculture Organization (FAO) of the United Nations, a small part of a typical swarm can eat as much food as 2,500 people in a single day. At these rates, the locusts consume most vegetation in their path and then must migrate to find new sources of food.

The locust outbreak of 2004 began in Morocco and Algeria in northwestern Africa. While the locusts can't be seen in satellite imagery, the conditions that support them are clearly visible. The above image shows how vegetation differed from previous years. The image is a composite of Normalized Difference Vegetation Index (NDVI) data collected between April 6 and April 13, 2004. Green areas indicate that there was more vegetation in the region than the average of the past four years. Not surprisingly, these areas correlate well with the early breeding grounds of the locusts near the interface between dry desert land and wetter coastal land.

When their numbers and the ending growing season forced the locusts to move, they traveled south and east on the summer winds. As of October 5, the locusts had expanded to the south in a band that stretched from Mauritania to Chad—a distance of roughly 4,000 kilometers. Currently, Mauritania is the worst affected, but Senegal, Mali, Burkina Faso, Niger, Chad, and the Cape Verde Islands have also been plagued with locusts. The swarms are now starting to move north again, this time into Libya and Algeria. On October 1, three to four million hectares of land were infested with locusts. As before, satellite imagery shows where locust swarms can migrate to find food by indicating where food is available. In the lower image, a composite of data collected between August 28 and September 4, 2004, pockets of green in southern Mauritania, Senegal, Mali, and Burkina Faso show where the locusts are finding food and breeding. The most recent information from FAO shows that these are indeed the areas where the locusts are concentrated.

Though the locusts themselves are harmless, they can cause significant crop damage. The worst of the problem is in Mauritania, where dark clouds of locusts have swarmed over much of the country. Rainfall had been good, and farmers anticipated a better-than-average harvest until the locusts arrived. Mauritania’s national food security authority expected to lose up to 75 percent of the cereal crop, though the Food and Agriculture Oragnization (FOA) of the United Nations expected a smaller loss. Undoubtedly, the insects are causing considerable damage, but both the Foreign Agricultural Service of the United States Department of Agriculture and the FAO say that it’s too early to quantify how the outbreak will impact overall production. Harvest began in September and continues through November, and the amount of crops that the locusts consume in the meantime will depend on how effective efforts to control them are and whether or not the locusts continue to breed.

To read more about the current locust situation in Africa, please visit the Desert Locust Information Service, a service provided by the Food and Agriculture Organization of the United Nations. For more information about monitoring locust outbreaks with satellites, see Locust!