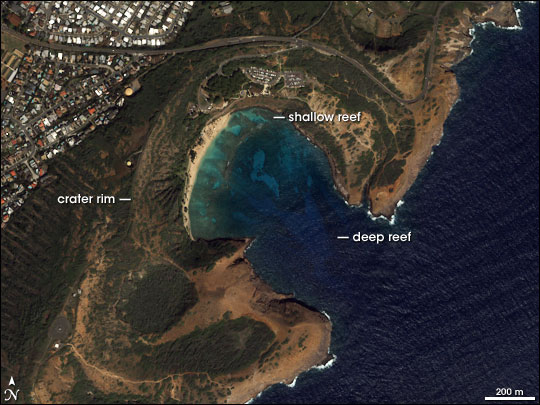 Hanauma Bay is the most popular area for snorkeling on the island of Oahu. Tame tropical fish [accustomed to handouts (now prohibited) from swimmers] inhabit a coral reef only a meter or two from the beach. The steep cliffs of a volcanic crater shelter the shore from the mid-Pacific waves.

The Hanauma Crater is a relic of the latest (and perhaps final) burst of volcanic activity to occur on Oahu. Tens of thousands of years ago (up to 80,000) a series of volcanic vents opened along the southeast shoreline of Oahu. Unlike the gentle lava flows currently building the island of Hawaii, the late-stage eruptions on Oahu were violent explosions. The volcanic vents that formed Hanauma Crater opened on the sea floor. Upwelling magma vaporized the ocean water and steam explosions atomized the magma into fine ash. The explosions built cones of ash, which solidified into a type of rock called ‘tuff’. The eruptions shattered the sea floor—coral reef and basalt—and scattered pieces that are now embedded in the tuff. Wave erosion eventually cut through the low, southeast wall of the crater, forming the current bay.

This image, acquired by the Ikonos satellite on November 7, 2002, shows Hanauma Bay and the surrounding crater. Shallow reefs along the shorline appear to almost break the surface of the water. Coral thrives out to the mouth of the bay, at a depth of 30 meters (100 feet). In the northwest corner is the dense development of Hawaii Kai, a suburb of Honolulu.