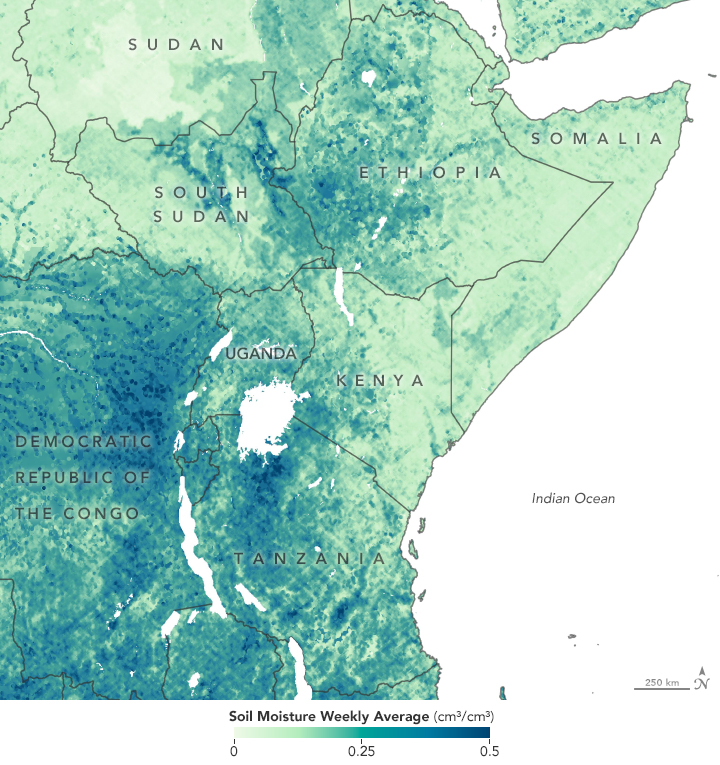 A single desert locust (Schistocerca gregaria) can consume its body weight in vegetation in one day. That may not sound like much for one 2.5-gram locust, but when 40 million of them gather—considered a small swarm—they can devour as much food as 35,000 people. In one day, a small swarm can jeopardize a farmer’s livelihood.

Since December 2019, croplands in Kenya have been inundated by the voracious insects. By January 2020, at least 70,000 hectares (173,000 acres) of land were infested—Kenya’s worst locust event in 70 years. In February, the swarms spread to ten countries in eastern Africa, threatening food supplies for millions of people. Ethiopia and Somalia have seen their worst locust infestations in 25 years. The United Nations (UN) has warned that the upcoming rainy season may make things worse.

NASA-funded scientists are partnering with the UN and relief organizations to better understand where locusts are likely to swarm. Using remote sensing observations of soil moisture and vegetation, researchers are tracking how environmental conditions influence locust life cycles and hoping to stop outbreaks before they spread.

“The approach that helps prevent large-scale infestations is to catch the locusts very early in their life stages and get rid of their nesting grounds,” said Lee Ellenburg, the food security and agriculture lead for SERVIR at NASA’s Marshall Space Flight Center. The joint program between NASA and the U.S. Agency for International Development (USAID) uses satellite data to improve environmental decision-making in developing nations. The team also partnered with staff at the Desert Locust Information System of the UN Food and Agriculture Organization (FAO) to learn more about locust behavior.

Desert locusts have three main life stages: egg, hopper, and adult. Once they are mature adults, locusts are difficult to find on the ground and eradicate because they can fly 50 to 150 kilometers (30 to 90 miles) per day, especially if winds are strong. However, eggs and hoppers (when they’re still developing wings) have limited mobility and are easier to target.

The maps on this page show two important environmental parameters for locust development: soil moisture and vegetation. Soil moisture is important because females almost always lay their eggs in wet, warm, sandy soil. In general, they do not lay their eggs unless the soil is moist down to 5-10 centimeters (2-4 inches) below the surface. After eggs hatch, the abundance of nearby vegetation becomes the important parameter because it provides sustenance for maturing locusts and guides migration patterns.

The image at the top of the page shows average soil moisture over eastern Africa for January 14-20, 2020, during the early stages of the locust invasion. The preliminary estimates—developed by scientists at the University Corporation for Atmospheric Research and the University of Colorado—use NASA’s Cyclone Global Navigation Satellite System (CYGNSS) micro-satellites and are integrated with NASA’s model-based Land Information System.

“The data we have so far show a strong correlation between the location of sandy, moist soils and locust activity,” said Ashutosh Limaye, NASA’s chief scientist for SERVIR. “Wherever there are moist, sandy locations, there are locusts banding or breeding.” Desert locusts rapidly reproduce, so SERVIR researchers are working with FAO to pinpoint potential breeding locations and suggest targeted areas for pesticide sprays.

“Our goal is to learn from FAO how to find out where the breeding grounds are,” Ellenburg added. “If the prevailing conditions indicate that locusts will hatch and be taking off, the goal is to go early and destroy their nesting grounds.” 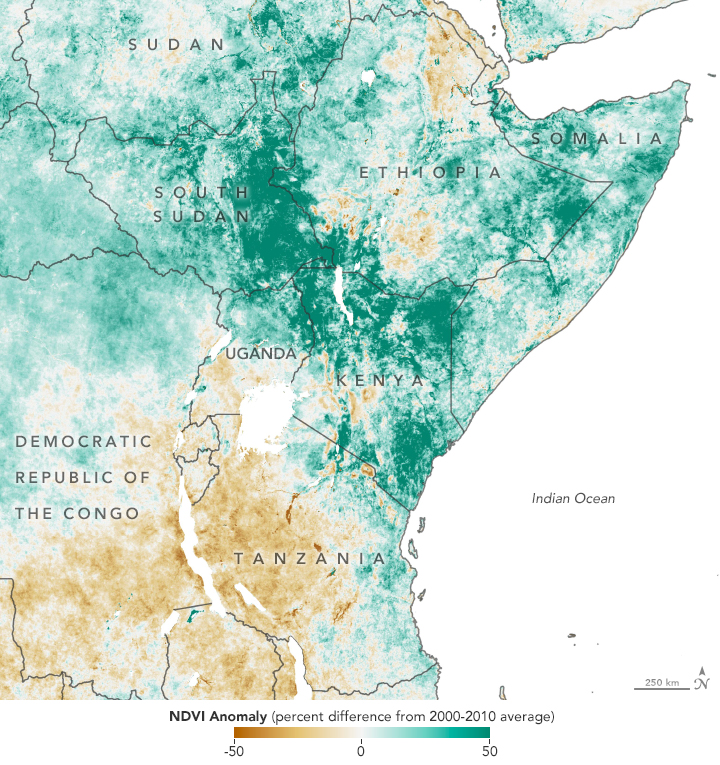 The map above depicts changes in green vegetation across eastern Africa between Dec 15, 2019, and March 15, 2020, compared to the same months averaged over 2000-2001. Derived from data collected by the Moderate Resolution Imaging Spectroradiometer (MODIS) on NASA’s Terra satellite, the Normalized Difference Vegetation Index (NDVI) is a measure of the health and greenness of vegetation based on how much red and near-infrared light it reflects. Healthy vegetation with lots of chlorophyll reflects more near-infrared light and less visible light.

“Once locusts lay the eggs and hatch, they start looking for vegetation to feed on,” said Catherine Nakalembe, a food security researcher with SERVIR and NASA Harvest. “They start migrating, looking for more to eat, and then keep multiplying.”

Nakalembe says vegetation across the region is much greener than average years—in fact, the greenest vegetation observed by satellite since 2000 for the December to March time period. Between October and December 2019, the Horn of Africa received up to four times more rainfall than average, making it one of the wettest “short rain seasons” in four decades. The extra rain made for robust plant growth and bountiful conditions for locusts.

With the upcoming “long rain season” (March through May) in east Africa, conditions could be ripe for more infestations, Nakalembe notes. The NASA team is refining several satellite datasets to assess the damage already caused and to create forecasts of where and how much longer locust outbreaks might occur.

“We work in close coordination with national ministries through our regional partners, and we hope the outcomes from our ongoing work can ultimately support those who are in the front line of managing the current outbreak,” said Nakalembe.

The NASA SERVIR and Harvest programs are working closely with Global and Regional FAO offices, USAID, World Food Program (WFP), the SERVIR Hub in East and Southern Africa at the Regional Center of Resources for Mapping Development (RCMRD) in Nairobi, Kenya, the SERVIR Hub in West Africa at the AGRHYMET based in Niamey, Niger, the Greater Horn of Africa IGAD Climate Prediction and Applications Center, NASA Short-term Prediction Research and Transition Center (SPoRT) NASA Earth Science Disasters Program, and several satellite missions to provide information and direction on where resources should be directed to mitigate locust outbreaks. 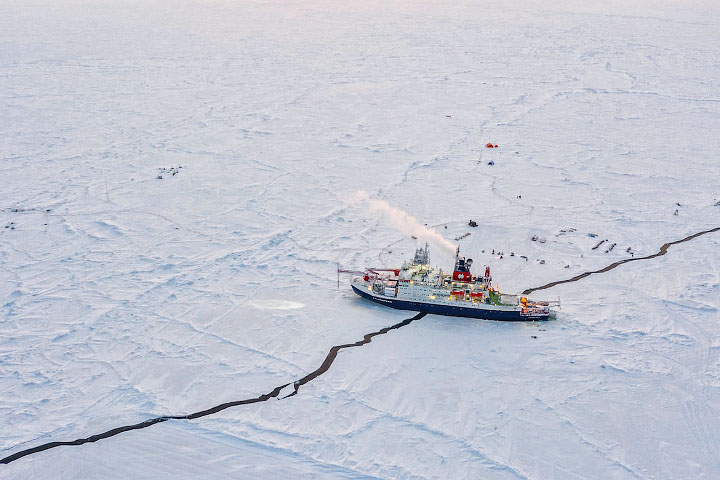 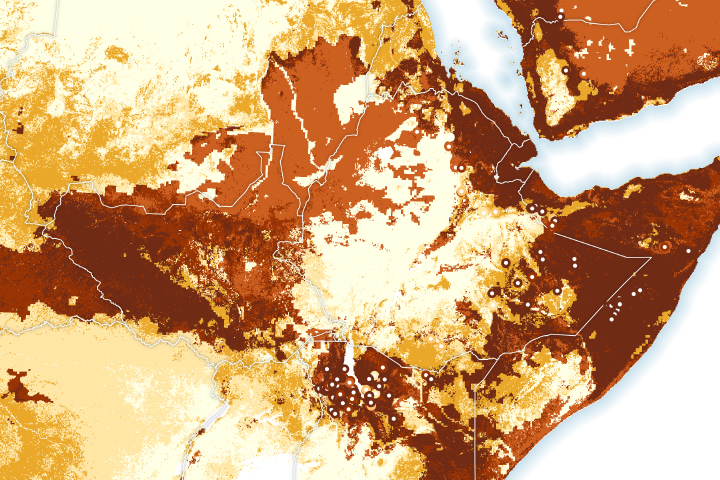