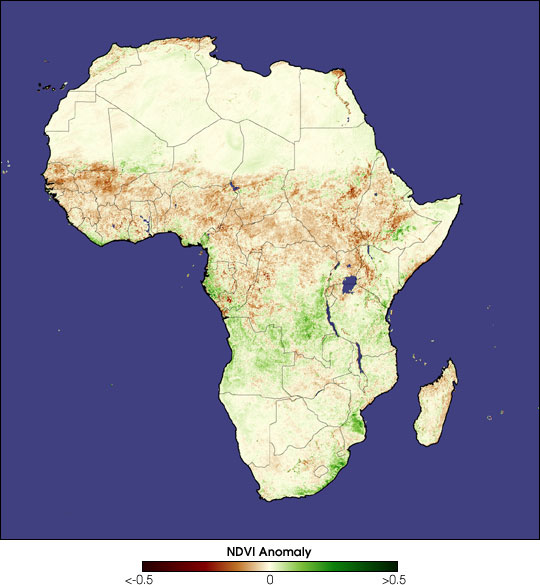 Devastating drought has once again set in over Africa, putting over 15 million people at risk of starvation and malnutrition in the coming months. The above image shows the Normalized Difference Vegetation Index (NDVI) anomaly across Africa in September 2002. Pieced together from data gathered by NOAA’s orbiting Advanced Very High Resolution Radiometer instrument, the NDVI anomaly depicts the relative density of present vegetation compared to years past. In this image of Africa, brown represents areas where vegetation density in September was less than it has been on average for the past 20 years, and green represents areas where vegetation density was greater than average.

As one can see, vegetation is markedly less dense in Eritrea and Ethiopia, which sit on the eastern side of the continent on the Horn of Africa. In this region, the rainy season occurs between February and June. The two nations received much less rainfall than normal this year, so their staple crops of corn and sorghum simply withered. Poor harvests over the past three years have worn away food surpluses and incomes in the region. As many as 14 million people may be at risk of malnutrition or starvation in Eritrea and Ethiopia by 2003. Government agencies and international organizations estimate that these people will need up to 270,000 metric tons of food assistance by December. Only 120,000 metric tons is available at present.

On the other side of the continent, dark brown also blankets the Western Sahalian countries that border the Sahara Desert. Though the drought there is not as bad as that on the Horn of Africa, over 1.5 million people have been affected in that region.