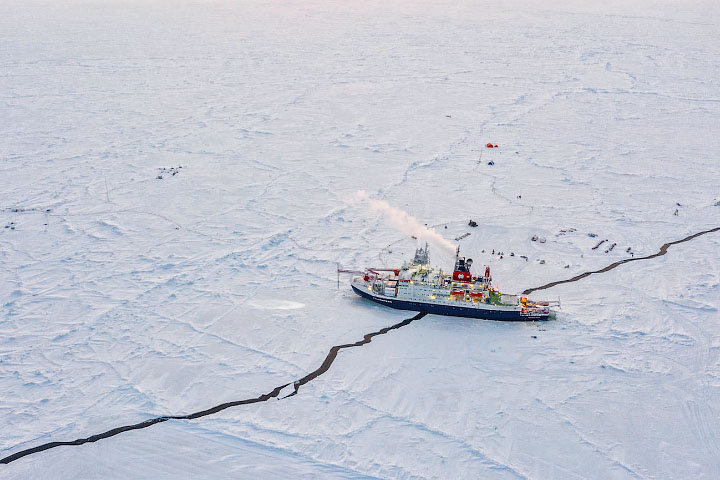 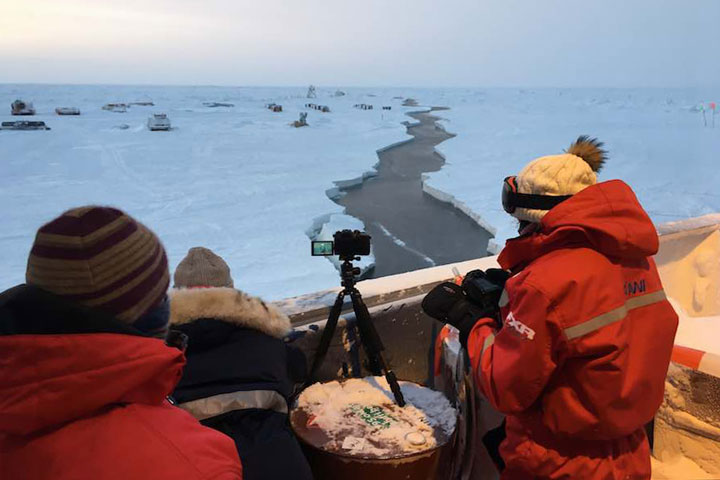 In September 2019, the German research icebreaker Polarstern left Norway and cruised toward the heart of the Arctic Ocean. The purpose: Spend a year frozen into the sea ice while scientists onboard make measurements of the effects of climate change. Now about halfway through the Multidisciplinary drifting Observatory for the Study of Arctic Climate (MOSAiC) expedition, the icebreaker has weathered the dark polar winter and daylight has started to return.

On March 11, 2020, the low Sun angle helped produce the striking orange and blue tones on the frozen landscape in the aerial photograph above (top image). Acquired via drone by Manuel Ernst, a photographer and graphics editor, it shows the Polarstern as it drifted with the sea ice about 260 kilometers (160 miles) from the North Pole. 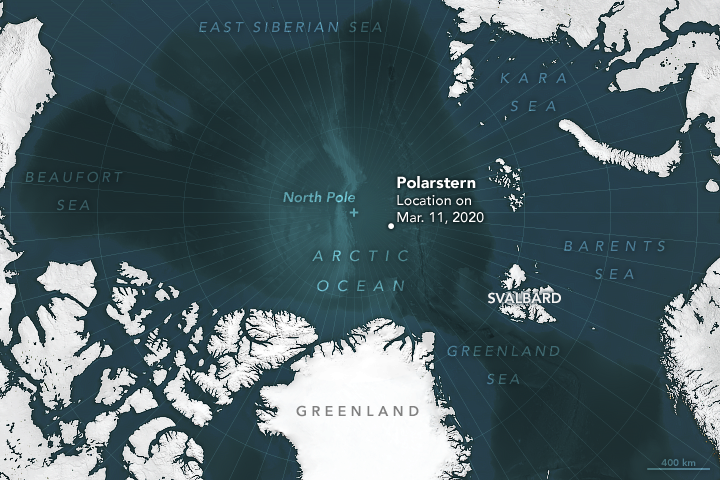 Steven Fons, a doctoral candidate at the University of Maryland and NASA’s Goddard Space Flight Center, is one of the hundreds of scientists from 20 countries involved with the expedition. His work is usually focused on using satellite data to measure sea ice thickness; working from the Polarstern, Fons is now getting a chance to make ground-based measurements of sea ice and see its small-scale complexities that are not so easy to see in satellite data.

Fons has been writing a blog about the expedition. In one post he described the cracks, or “leads,” that appeared in the sea ice in the vicinity of the ship—including one that had grown a few meters wide and ran directly under the ship. The crack is visible in the top aerial photograph on March 11. That same day, Fons shot the photograph of scientists on the ship’s deck watching the lead grow (second image).

“Seeing a lead open up for the first time was a really interesting experience that invoked a lot of emotions,” Fons said. “For one, it was a new event for me and a truly fascinating phenomenon, and I could have sat out watching it all day—if it wasn’t -35 degrees Fahrenheit out. Leads are also important for sea ice thickness measurements, so it was great to see a physical representation of the sea ice freeboard and the sea surface right in from of my eyes.” 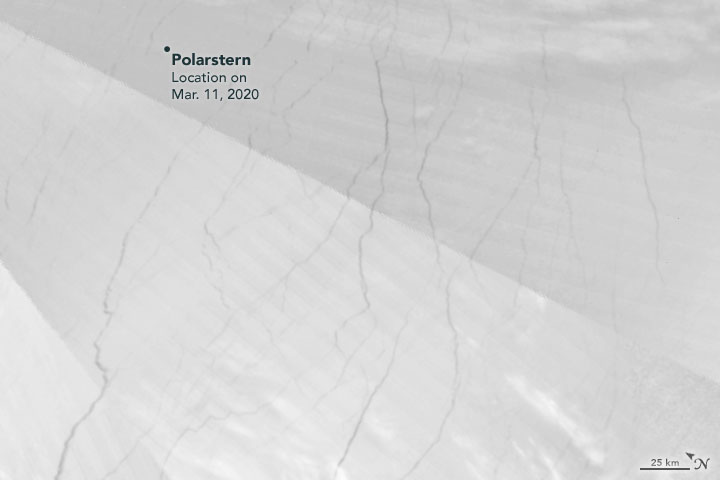 Leads in the Arctic ice in March were more widespread than revealed by the photographs. A network of large crisscrossing cracks shows up in the composite satellite image above, composed from three images acquired on March 11 with the Visible Infrared Imaging Radiometer Suite (VIIRS) on the NOAA-NASA Suomi NPP satellite. There was not yet enough daylight for the satellite to acquire a visible (photo-like) image of the area; instead, this image makes use of the low-light sensor on VIIRS known as the day-night band (DNB), which detects light in a range of wavelengths from green to near-infrared, and uses filtering techniques to observe signals.

“The first lead did not have a direct impact on any instruments, but subsequent leads caused anchor lines and power cables to break, required the relocation of instruments and installations, and altered plans for on-ice sampling,” Fons said. “Further leads could drastically alter the course of MOSAiC, and it’s important to remember the destructive potential that they have.” 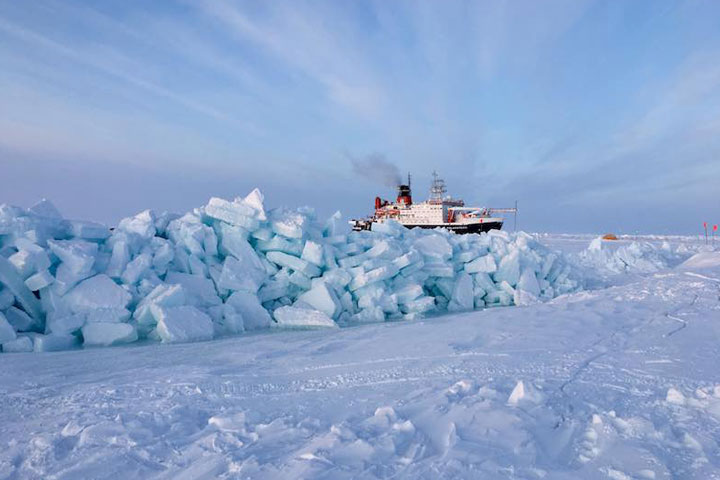 Fons notes that the threat from leads are only half of the concern. The two sheets of ice on either side of a lead can collide with a force large enough to form ridges several meters tall and to crush anything in the middle.

“When ridges form, you can really hear it—the groaning and screeching and crushing sound that comes from two massive sheets of ice pressing together,” Fons said. “The sound is kind of like a combination of two pieces of Styrofoam rubbing together and a motorcycle engine, depending on the speed and thickness of ice.”

Fons shot the photograph of one such ridge that had formed near the Polarstern. He notes that he can stand and watch these ridges rise as they quickly form, sending blocks of ice toppling over. “Despite how stable and stationary the ice pack feels,” Fons said, “these subtle events serve as reminders of how dynamic this system can be.”

Just a handful NASA-funded scientists are participating in MOSAiC, but the connections and collaborations remain important. “It is a huge privilege to represent NASA in such a large and interdisciplinary field campaign,” Fons said. “Not only are people from all of the countries represented in MOSAiC familiar with NASA and the work that the agency does, but they all get excited to hear about the projects I work on and how NASA ties into the MOSAiC Expedition.”

Cracks in the Arctic sea ice are important for satellite-based measurements of the ice’s thickness. They also pose challenges for ship-based researchers participating in the MOSAiC expedition.