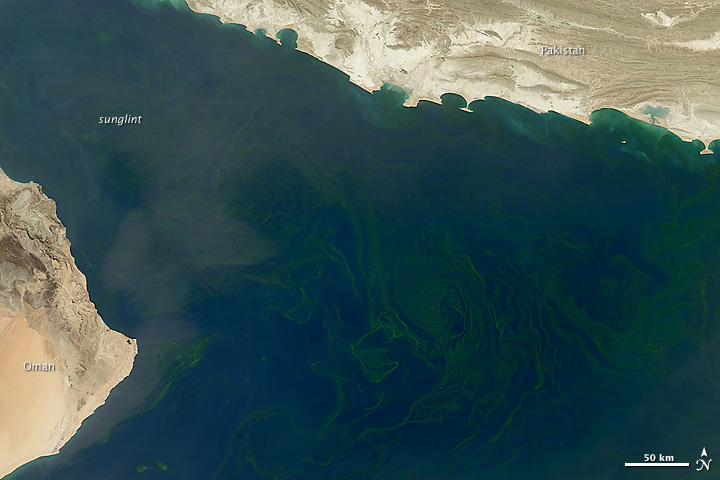 Phytoplankton swirled across the Arabian Sea on February 18, 2010, drawn into thin green ribbons by turbulent eddies. The bloom stretches from the shores of Pakistan (top) to the coast of Oman (lower left). The washed out appearance at the upper left of the image is due to sunglint, which is the mirrorâ€“like reflection of sunlight off the water. Some of the brightness may be caused by blowing dust. Pakistan’s coastal waters are tinged blue as well as green. The color may result from numerous influences, including phytoplankton and sediment.

The phytoplankton blooms in the northern Arabian Sea are strongly influenced by the seasonal wind shifts (the monsoon) that dominate the area’s climate. Because the Arabian Sea is landlocked to the north, it is less influenced by large-scale ocean circulation and more strongly influenced by the monsoon winds. Large blooms of phytoplankton occur in the summer, when strong southwesterly winds blow from the ocean toward land, mixing the water. Blooms also happen in the winter, however, when northeast winds blow offshore.

In the past few years, a team of oceanographers studying the Arabian Sea has noticed that kinds of phytoplankton present during the Northeast (winter) Monsoon seem to be changing. Among the changes is the increasingly frequent and widespread appearance of a dinoflagellate species called Noctiluca miliaris. Prior to the late 1990s, this type of phytoplankton showed up only sporadically during summer blooms, usually in conjunction with the upwelling of low-oxygen waters. According to the researchers, the unusual abundance of this organism in winter blooms may be a sign that the waters of the Arabian Sea are becoming more eutrophic—overly fertile and oxygen-depleted.

It generally isn’t possible to identify phytoplankton species through satellite observations alone, and many other kinds of phytoplankton occur in the area. However, the scientists’ description of the interloper—“N. miliaris tends to aggregate at the surface to form large, slimy green patches”— is certainly consistent with the bloom shown in this image. This natural-color image was captured by the Moderate Resolution Imaging Spectroradiometer (MODIS) on NASA’s Aqua satellite.