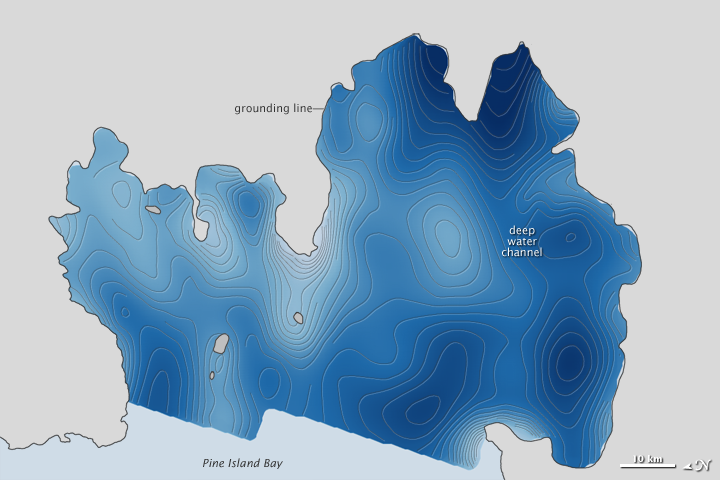 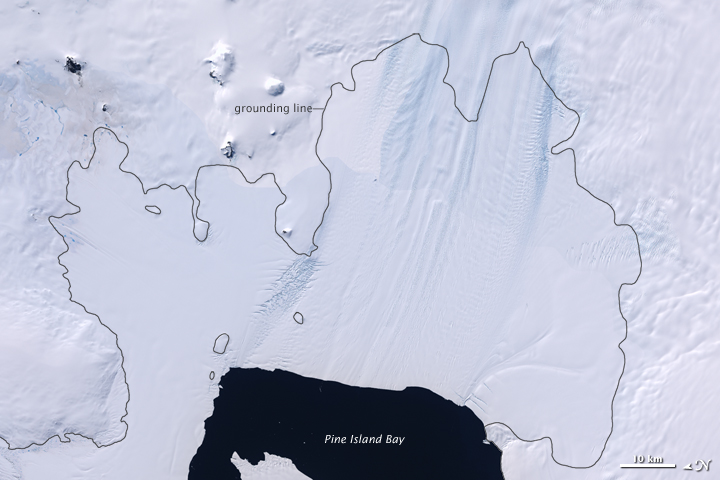 In October 2009, a series of flights over Antarctica led to the discovery of a hidden feature beneath a floating ice shelf. Scientists participating in NASA’s Operation IceBridge mapped the water depth and seafloor topography beneath Pine Island Glacier and found a deepwater channel—a likely pathway for warm water to reach the glacier’s underbelly and melt it from below.

The second image shows Pine Island Glacier and the surrounding solid land in Antarctica as they appear from space. The view is a subset of the Landsat Image Mosaic of Antarctica, the first true-color, high-resolution visual map of Antarctica. The black, jagged outline in both images shows the “grounding line,” the point where the glacier is attached to the bedrock along the coast.

Operation IceBridge is a series of yearly flights to the Arctic and Antarctic by NASA research aircraft. The planes are equipped with laser and radar instruments that measure the elevation of the ice surface and the bedrock below, but neither can penetrate water.

That’s where the gravimeter, operated by Columbia University, comes into play. The instrument measures the gravitational pull of the different materials found beneath the plane's flight path. From the gravity field, researchers can differentiate between ice, water, and rock—which each have a different density—and then estimate the thickness of each material. From those measurements, IceBridge researchers pieced together this map of the thickness, or depth, of the water layer below Pine Island Glacier.

It’s not the first time scientists have seen below the ice shelf. Earlier in 2009, the United Kingdom’s National Oceanography Centre maneuvered an autonomous underwater vehicle below the shelf for a close-up look. But the robot encountered some high underwater ridges (seen in the topographic map above) and researchers surmised that the ridge extended the width of the shelf.

The newly discovered channel from IceBridge might help explain a lot of recent changes to the glacier, which drains more than 79 cubic kilometers (19 cubic miles) of ice per year from the West Antarctic Ice Sheet. Warm, deep-ocean water has a clear path through the channel, where it can penetrate to the grounding line and weaken the ice shelf.

It’s unclear how or when the channel formed, or how many other ice shelves have similar features lurking below. But the new map should help scientists make better predictions about ice dynamics and how melting ice might contribute to sea level rise.

NASA Earth Observatory images created by Jesse Allen, based on a model by Michael Studinger of NASA IceBridge and gravity data from Columbia University. Caption by Kathryn Hansen and Michael Carlowicz.