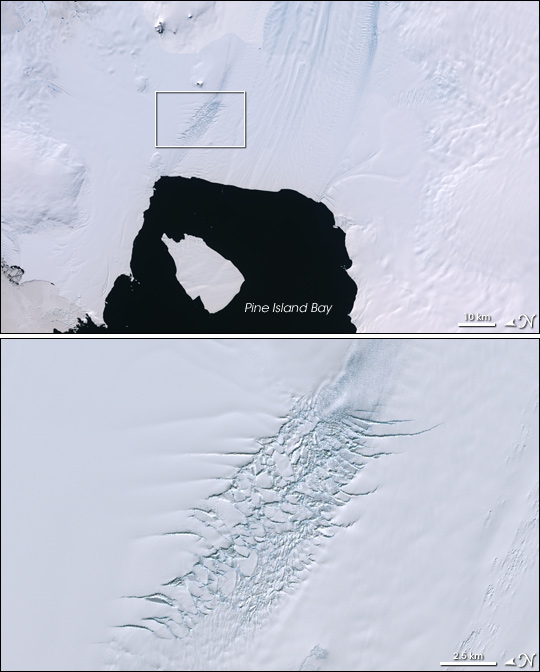 Just around the corner from the Antarctic Peninsula, the Pine Island Glacier has been the focus of scientific attention for many years. Observations over the past few decades show that the glacier has lost elevation and that the ice shelf’s grounding line—where the glacier loses contact with the ground and begins to float—has retreated inland. Large numbers of deep crevasses are a sign that parts of the glacier are moving rapidly. In late 2000, a warren of deep crevasses along one edge of the glacier spawned a huge crack that propagated across the width of the glacier in less than a year, cleaving off a giant iceberg into the Amundsen Sea.

This image of Pine Island Glacier from the Landsat Image Mosaic of Antarctica (LIMA) shows the area since the big calving event. The large iceberg has drifted away from the glacier’s terminus into Pine Island Bay, whose dark waters are the only contrast with the snow and ice-covered landscape surrounding it. Bluish shadows reveal the texture of the icy terrain. Long, parallel lines of lighter blue show the flow direction (from top to bottom in the image), while shorter, darker lines going across the glacier indicate crevasses. At upper left, a few bright blue dots indicate the location of melt ponds. The lower image in the pair is a close up of the dense concentration of crevasses along the margin of the glacier. A region like this one spawned the glacier-spanning crack in 2000.

In early January 2008, the Pine Island Glacier was getting some personal scientific attention from a team of researchers led by NASA scientist Robert Bindschadler of Goddard Space Flight Center. Bindschadler and his colleagues set out on an expedition to make the first human visit to the ice shelf. Their goal is to investigate the hypothesis that the rapid retreat of the Pine Island Glacier is due to the rising water temperatures beneath the ice shelf. Warming water, they suspect, is thinning the ice shelf. Since the grounded portion of the ice shelf provides resistance to the glacier’s flow, thinning could be allowing the glacier to accelerate. To collect the observations they need to answer their questions, the team plans to drill through the ice shelf to the water below and collect observations of the temperature, depth, and salinity. To learn more about the expedition and to read blogs from the first stage of the project, a reconnaissance mission ongoing in early January 2008, please visit the Pine Island Glacier Ice Shelf Website.

NASA image by Jesse Allen, based on LIMA data provided by the U.S. Geological Survey. Caption by Rebecca Lindsey.