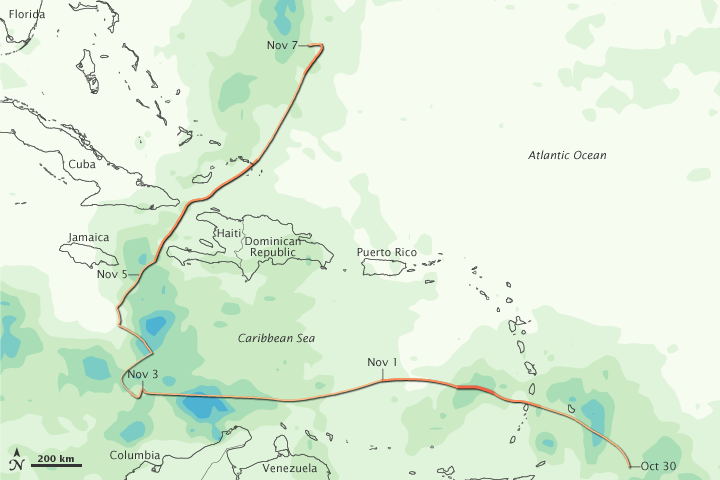 Tomas delivered heavy rains on its zigzag trek through the Caribbean in early November 2010. This image shows total rainfall over the region from November 1–7, 2010. The heaviest rainfall—more than 600 millimeters or nearly 24 inches—appears in dark blue. The lightest rainfall—less than 75 millimeters or 3 inches—appears in light green. Superimposed on the rainfall amounts is the storm track, with darker shades of orange corresponding with greater storm intensity. Initially forming on October 29, Tomas oscillated between tropical depression and hurricane strength more than once during its 10-day lifespan.

Tomas caused particular worry in Haiti, as it was the first hurricane to affect the country since the devastating January 2010 earthquake. The quake left more than a million Haitians homeless, and many were still living in tent cities when Tomas arrived, according to Agence France-Presse. Days before Tomas passed, health officials announced a cholera epidemic, a situation that could grow worse with heavy rainfall and flooding. Tomas largely spared the city of Port-au-Prince, but the storm inundated coastal towns, destroyed hundreds of homes, and triggered mudslides.

Tomas strengthened and weakened multiple times after forming on October 29, 2010. On November 5, the storm was a Category One hurricane hovering between Haiti and Cuba. 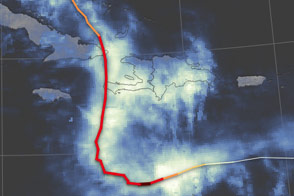