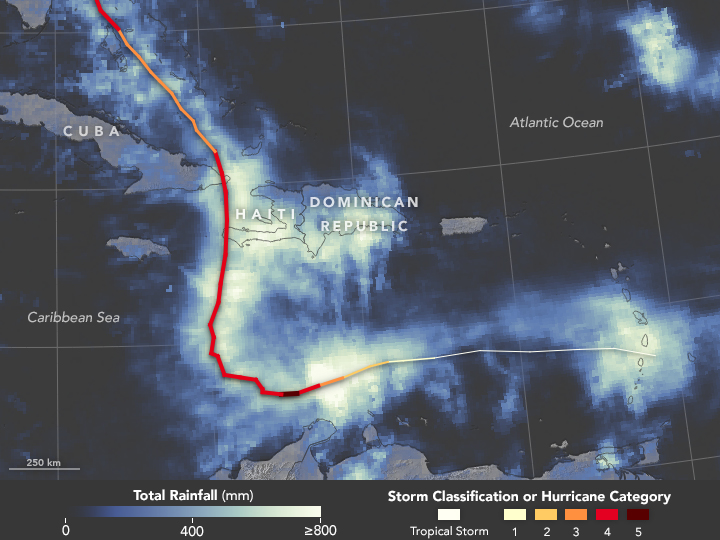 On October 4, 2016, Matthew slammed into southwestern Haiti near Les Anglais as a category 4 hurricane. Over the next few days, the slow-moving storm dropped upwards of 800 millimeters (30 inches) across parts of the impoverished nation. While aid workers and government officials have only begun to tally the damage, preliminary assessments suggest that more than 800 people have died as a result of the storm. Hundreds of thousands of homes were damaged or destroyed. Meanwhile, public health authorities fear that the rush of rain will worsen a cholera epidemic that was already present.

The map above depicts satellite-based measurements of rainfall that fell on Haiti from September 28 to October 7, 2016, as compiled by NASA. These rainfall totals are regional, remotely-sensed estimates, and local amounts can be significantly higher when measured from the ground. Storm track and wind-scale data are overlaid on the rainfall map. Major hurricanes are those that reach category-3 status or higher on the Saffir-Simpson scale, with maximum sustained winds of at least 111 miles (178 kilometers) per hour. Matthew strengthened to a major hurricane on September 30.

Rainfall data come from the Integrated Multi-Satellite Retrievals for GPM (IMERG), a product of the Global Precipitation Measurement mission. IMERG pulls together precipitation estimates from passive microwave and infrared sensors on several satellites, as well as monthly surface precipitation gauge data, to provide precipitation estimates between 60 degrees North and South latitude. The GPM satellite is the core of a rainfall observatory that includes measurements from NASA, the Japan Aerospace Exploration Agency, and five other national and international partners.

Matthew began dropping large amounts of rain while offshore of South America. As the category 4 storm curved northward, intense rainfall continued on a track between Haiti and Cuba. Note that rainfall amounts on the western side of Matthew’s center increased over Haiti where the storm’s counter-clockwise cyclonic circulation interacted with the country’s rugged topography. A separate but nearby cluster of thunderstorms on the eastern side of Matthew also contributed to the rainfall totals.