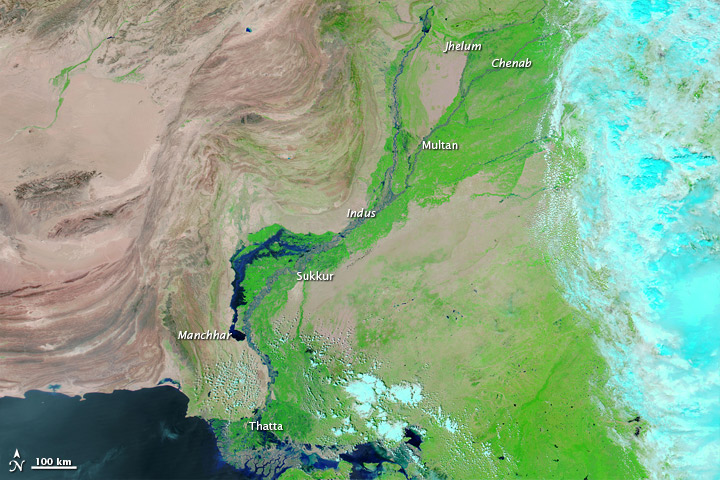 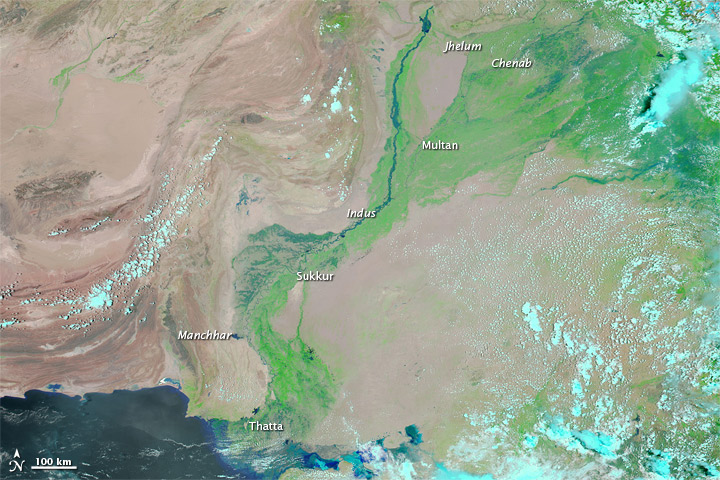 By late July 2010, tens of thousands of Pakistanis had been displaced by heavy rains. Two months later, the number of displaced had grown to 6 million, and the United Nations estimated that some 20 million people had been affected in some way. Flood conditions extended nearly the length of the country, and the crisis was not over.

Acquired by the Moderate Resolution Imaging Spectroradiometer (MODIS) on NASA’s Aqua satellite, these images show the Indus River Valley on September 20, 2010 (top), and July 16, 2010 (bottom). Both images use a combination of infrared and visible light to increase the contrast between water and land. Water ranges in color from electric blue to navy. Vegetation appears bright green. Bare land ranges from pink-beige to brick red. Clouds are pale blue-green.

The image from mid-July shows the region at the beginning of the flood season, in which the Indus is confined to braided channels, and the Jelum and Chenab Rivers are barely visible.

The image from late September shows the same region after weeks of flooding. One benefit of the monsoon rains is apparent in the increased greenery along the river basins. More striking, however, are the floodwaters that linger on the landscape, especially west of Sukkur, and along the coast. Compared to conditions in late August, however, water levels have dropped along much of the Indus, Jhelum, and Chenab Rivers.

By late September, the most obvious lingering devastation was probably the floodwater lake that formed west of the Indus River. The massive water body terminated at Manchhar (also spelled Manchar) Lake, which rose rapidly, eventually inundating some 300 nearby villages. According to a report from Dawn.com, efforts to divert floodwaters into the Indus River had lowered the lake level very slightly, but draining all the excess water would likely take 35 days. David Petley of Durham University observed that, given the amount of time projected for the draining of this floodwater lake, Pakistan’s flood conditions could last for roughly three months—an extraordinary duration for river flooding.

Even after the floodwaters receded, the effects of the 2010 monsoon floods were expected to linger. The Associated Pres reported that the United Nations Children’s Fund (UNICEF) warned that more than 100,000 children faced death from starvation, waterborne diseases, and malaria. United Nations Secretary-General Ban Ki-moon described the Pakistan flooding as the worst crisis he had ever witnessed. The number of people affected and geographic scale of the disaster strained the resources of the Pakistan government and international aid agencies.