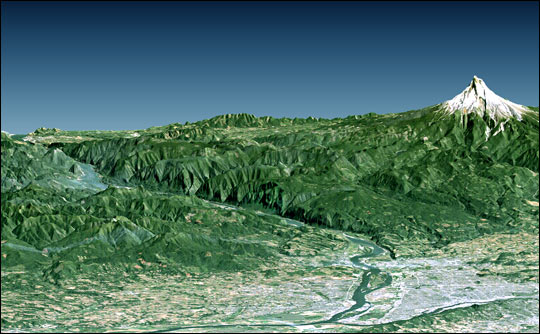 Portland, the largest city in Oregon, is located on the Columbia River at the northern end of the Willamette Valley. On clear days, Mount Hood highlights the Cascade Mountains backdrop to the east. The Columbia is the largest river in the American Northwest and is navigable up to and well beyond Portland. It is also the only river to fully cross the Cascade Range, and has carved the Columbia River Gorge, which is seen in the left-central part of this view. A series of dams along the river, at topographically favorable sites, provide substantial hydroelectric power to the region.

Landsat has been providing visible and infrared views of the Earth since 1972. SRTM elevation data substantially help in analyzing Landsat images by revealing the third dimension of Earth’s surface, topographic height. The Landsat archive is managed by the U.S. Geological Survey’s EROS Data Center (USGS EDC).