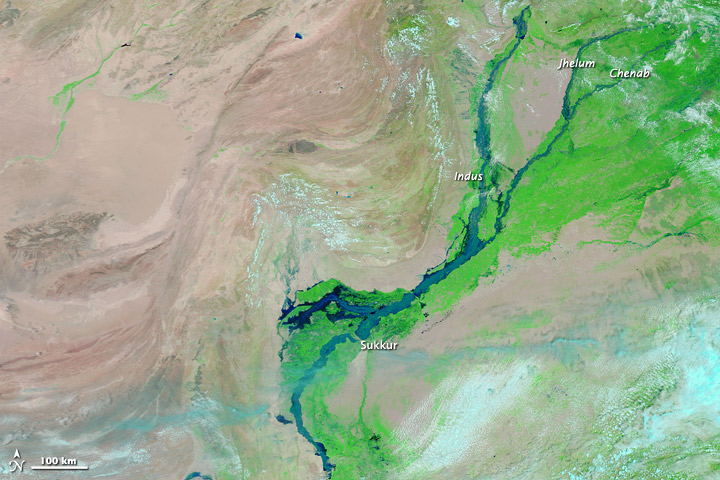 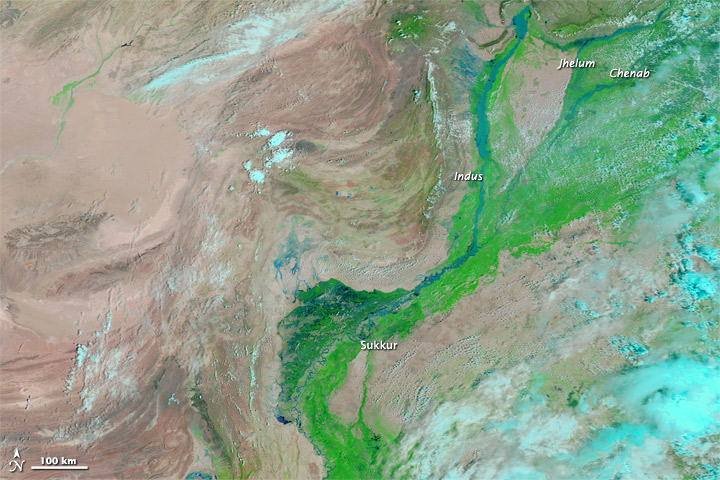 Although Pakistan’s rivers remained well above normal in the northern reaches of the country, flooding had largely shifted to the south by late August 2010. Rising waters forced thousands from their homes in southern Pakistan, according to news reports. The New York Times reported that hundreds of thousands were being housed in camps set up in military facilities and public buildings, but thousands more were relying on makeshift shelters and beds along roads and canal embankments.

The Moderate Resolution Imaging Spectroradiometer (MODIS) on NASA’s Terra satellite captured these images on August 22, 2010 (top), and July 31, 2010 (bottom). Both images use a combination of infrared and visible light to increase the contrast between water and land. Clouds appear in varying shades of light blue-green. Vegetation is green, and bare ground is pinkish brown. Water varies in color from electric blue to navy, and differences in the shade of blue may result from the angle of sunlight and/or sediment load in the water.

The image from the end of July shows the region when the monsoon floods of 2010 primarily affected northern Pakistan. Flooding is quite apparent near the top edge of the image. Tendrils of standing water extend from the Indus River toward the northwest. South of Sukkur, however, the Indus remains a thin, braided stream.

The image from late August shows a different situation. Water levels appear to have fallen slightly in the north, although they remain well above normal. In the south, the Indus has expanded to many times its usual width, both north and south of Sukkur.

On August 22, 2010, The New York Times reported that the town of Sukkur was overflowing with displaced people seeking food and shelter. Many of the flood refugees had come from other parts of the relatively low-lying province of Sindh, where floodwaters might take months to recede.

Acquired August 22, 2010, and July 31, 2010, these false-color images show the shift of floodwaters toward southern Pakistan.