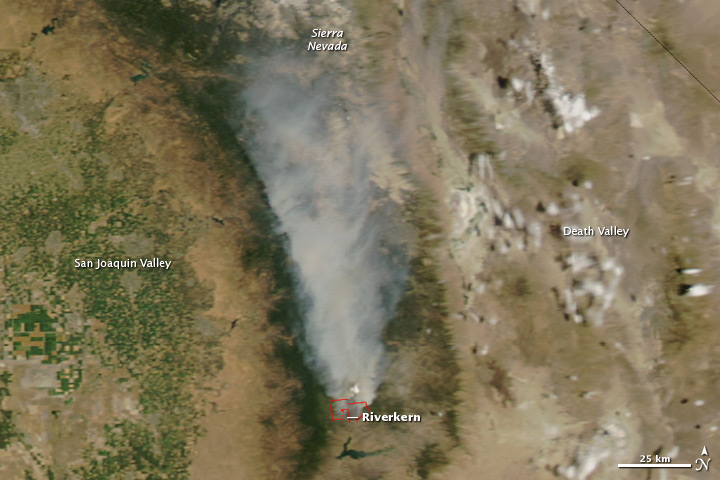 The fast-growing Bull Fire burned on the southern edge of California’s Sequoia National Forest on July 27, 2010. Outlined in red, the fire was producing thick plumes of smoke when the Moderate Resolution Imaging Spectroradiometer (MODIS) on NASA’s Aqua satellite captured this image at 2:40 p.m. U.S. Pacific Time. The smoke was blowing north over the forest.

The Bull Fire started on Monday, July 26 at about 1:46 a.m., according to the multi-agency incident report for the fire. Burning through grass, brush, oak, and scattered pine and aided by high temperatures, the fire grew quickly on steep, hard-to-access ground. As of about 10 p.m. on July 27, the fire had burned 11,000 acres, said the incident report.

The fire forced evacuations in the community of Riverkern, where six homes were destroyed, reported CNN. The Bull Fire was one of two large fires burning in Kern County on July 27. Though the cause is still under investigation, the fire may have been started by people, said the incident report.

The Sequoia National Forest is at the southern end of the Sierra Nevada range. In this image, the mountains are covered in deep green forest. The snow-capped peaks north of the fire are dingy brown and partially obscured by smoke. To the west of the mountains is San Joaquin Valley, the southern half of the Central Valley. The valley is checkered with green farm fields and dotted with gray cities and towns. In the rain shadow of the Sierra Nevada, the land to the east is mostly desert brown and tan. This area is Death Valley National Park, which is part of the Mojave Desert. The Nevada state line cuts across the upper right corner of the image.

Outlined in red in this true-color image from July 27, 2010, the Bull Fire produced thick plumes of smoke as it burned near the southern edge of the Sequoia National Forest in southern California.

The fast-moving Bull fire started near the southern edge of California’s Sequoia National Forest on July 26, 2010.