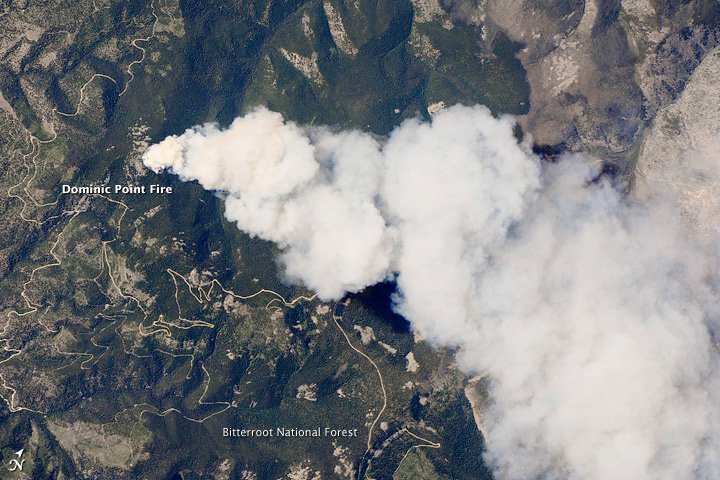 Lightning strikes and human activities in the forested mountains of the western United States can spark wildfires during the summer dry season. The Dominic Point Fire was first reported near 3:00 p.m. local time on Sunday, July 25, 2010. Approximately one hour later, the International Space Station crew photographed the fire’s large smoke plume—already extending at least 8 kilometers (5 miles) to the east—from orbit as the station passed almost directly overhead. Forest Service fire crews, slurry bombers, and helicopters were on the scene by that evening.

The fire may have been started by a lightning strike, as there are no trails leading into the fire area located approximately 22 kilometers (14 miles) northeast of Hamilton, Montana, according to local reports. As of July 26, 2010, the fire had burned approximately 700 to 1,000 acres (283 to 405 hectares) of the Bitterroot National Forest in western Montana. The fire is thought to have expanded quickly due to high temperatures, low humidity, and favorable winds with an abundance of deadfall—dead trees and logs that provide readily combustible fuels—in the area.

Astronaut photograph ISS024-E-9526 was acquired on July 25, 2010 with a Nikon D3X digital camera using an effective 1000 mm lens, and is provided by the ISS Crew Earth Observations experiment and Image Science & Analysis Laboratory, Johnson Space Center. The image was taken by the Expedition 24 crew. The image in this article has been cropped and enhanced to improve contrast. Lens artifacts have been removed. The International Space Station Program supports the laboratory as part of the ISS National Lab to help astronauts take pictures of Earth that will be of the greatest value to scientists and the public, and to make those images freely available on the Internet. Additional images taken by astronauts and cosmonauts can be viewed at the NASA/JSC Gateway to Astronaut Photography of Earth. Caption by William L. Stefanov, NASA-JSC.

This image of the Bullock Fire was taken by the crew of the International Space Station using a digital camera on May 23, 2002, two days after the fire began. By May 25, fighting the fire was listed as the top national priority.

This image of the Bullock Fire was taken by the crew of the International Space Station using a digital camera on May 23, 2002, two days after the fire began. By May 25, fighting the fire was listed as the top national priority.