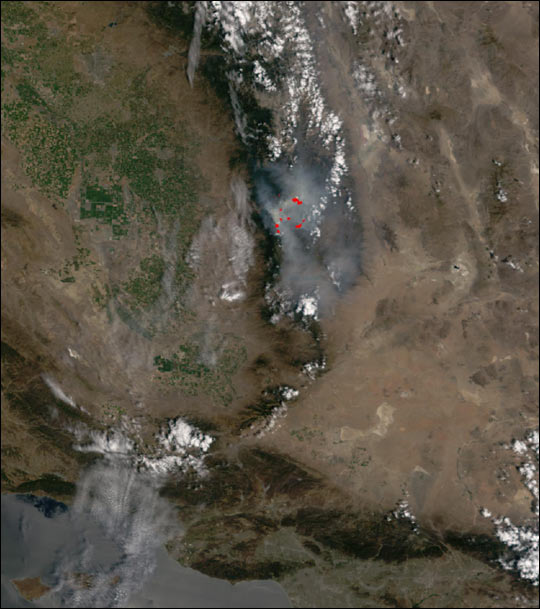 Even through heavy smoke a number of actively burning areas of the McNalley Fire in Sequoia National Forest north of Kernville, California, were detected in this image from the Moderate Resolution Imaging Spectroradiometer (MODIS) captured on July 24, 2002. These active fires are marked with red dots, and they provide evidence of the struggle firefighters face: the fire is only 5 percent contained, and active on multiple fronts.

Begun Sunday, July 21, the fire has consumed more than 57,000 acres in 100-to 200-foot flames. According to news sources, a woman has been arrested for allegedly starting the fire, which is currently being considered accidental.

The fire threatens the magnificent, ancient trees of Sequoia National Monument, some of which are thousands of years old. But not al fire is a threat to the forest. Visit the Forest Service Giant Sequoia Page for more information on the role of fire in the life cycle of the Giant Sequoia.

Image courtesy Jesse Allen, based on data from the MODIS Rapid Response System

In late July and August 2002, the McNalley Fire in Sequoia National Forest and the Pines Fire near San Diego consumed over a hundred thousand acres in California