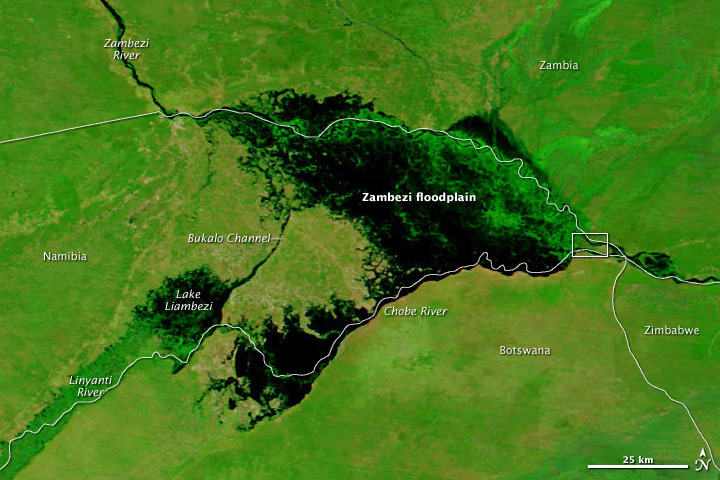 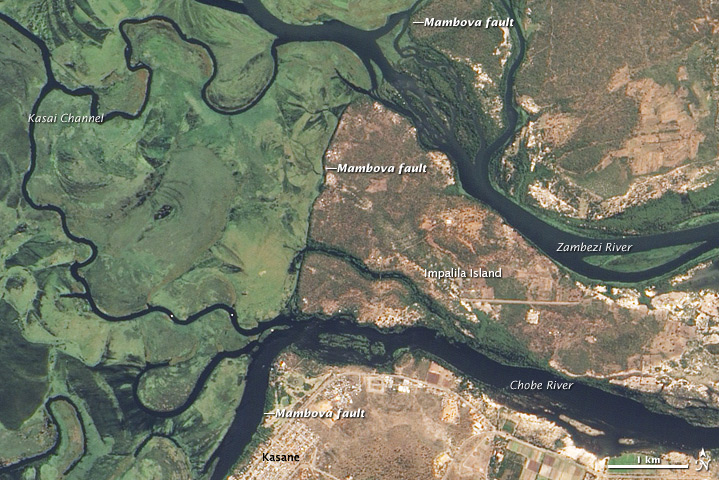 The Zambezi River is one of the great rivers of Africa. Originating in swampy wetlands in Angola in southwestern Africa, the river flows 2,736 kilometers (1,700 miles) across the continent to the Indian Ocean. Along the way, the Zambezi tumbles over one of the world’s largest waterfalls, flows through deep gorges, and spreads across broad floodplains. These images, both taken on May 8, 2010, show the river’s annual flood in one of the broad floodplains in the Zambezi’s upper reaches.

Sandwiched between Botswana and Zambia, the narrow neck of land that is the Caprivi Strip gives Namibia access to the Zambezi River. Defined by the Zambezi and Chobe Rivers, the eastern tip of the Caprivi Strip is usually under water during the flood season in March and April, as shown in the top image. Water is black in the false-color image, which was made with both infrared and visible light measured by the Moderate Resolution Imaging Spectroradiometer (MODIS) on NASA’s Terra satellite.

Interestingly, the flood confines itself to the gap between the two rivers, as if constrained by country borders. One might expect, in such a case, that water flowing from the Chobe River into the rain-swollen Zambezi is backing up onto the floodplain, but that is not the case. The land immediately behind the confluence is dry; the floodplain ends several kilometers west of the confluence. Why? The detailed view of the eastern edge of the flood plain (top image) provides some clues.

The Advanced Land Imager on NASA’s Earth Observing-1 (EO-1) satellite captured the lower image several minutes before Terra MODIS acquired the top image. The extent of the EO-1 ALI image is outlined in white on the top MODIS image. This highly detailed true-color image shows the stark eastern edge of the floodplain. To the left of the edge, water covers everything. Deep blue channels wind among green, shallowly flooded plains. To the right of the edge, the land is dry. The city of Kasane is perched confidently along the edge of the flood plain. What stops the water from flooding the city and everything else east of the line?

The eastern edge of the flood plain is defined by the Mambova Fault, which elevated the land on its eastern side. The Zambezi and Chobe Rivers cut channels across the fault, but the shallow flood plain has not surmounted the elevated ground. The triangle between the two rivers and the fault creates Impalila Island. A channel of water, called the Kasai, connects the two rivers in the flood plain.

Floods on the Zambezi occur when heavy rains fall on the wetlands in Angola and Zambia. The water flows downstream and gets backed up at the Mambova fault. The river expands over the flat floodplain behind the fault until the waters meet the channel cut by the Chobe River in the south. During the annual flood, the build up of water from the Zambezi River overcomes the Chobe, and water begins to flow south into Lake Liambezi. At the height of the flood, water occasionally flows directly into Lake Liambezi from the Zambezi River through the Bukalo Channel, as it did on May 8, 2010.

Originating in swampy wetlands, the river tumbles over one of the world’s largest waterfalls, flows through deep gorges, and spreads across broad floodplains.