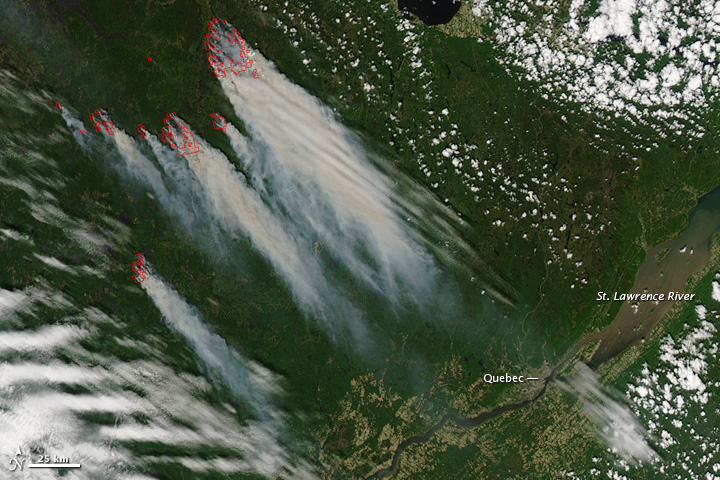 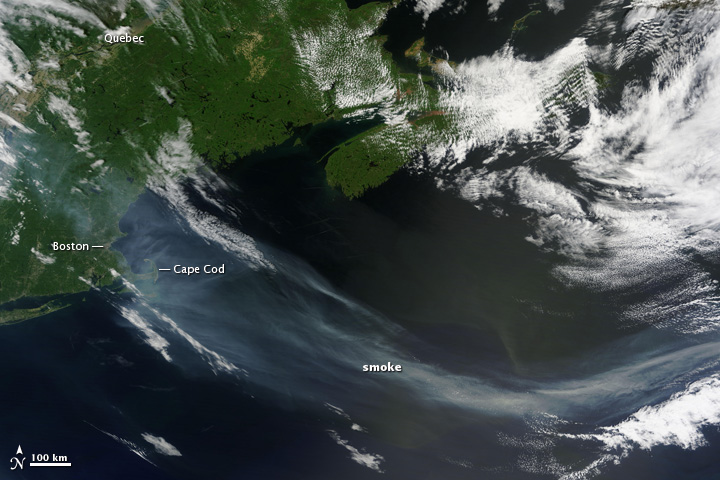 Smoke over New England and the North Atlantic - May 31, 2010JPEG

Smoke over New England and the North Atlantic - May 31, 2010TIFF

A thick river of smoke flowed southeast over New England from several large forest fires in southern Quebec, Canada on May 31, 2010. These images show both the fires (top image) and the thick smoke they produced (lower image). Red boxes outline the fires north of Quebec, Canada, in the top image, which was taken by the Moderate Resolution Imaging Spectroradiometer (MODIS) on NASA’s Aqua satellite on May 30, 2010. Dense smoke pours from the fires and blows southeast toward the city of Quebec, a cement gray region along the St. Lawrence River.

By the following day, the smoke had reached New England and flowed over the North Atlantic Ocean. The MODIS sensor on NASA’s Terra satellite captured the lower image at 11:10 a.m. U.S. Eastern time on May 31. The image covers a much broader region than the top image. A pale gray smoke plume spans the entire width of the image—about 1,900 kilometers (1,200 miles). The plume is over 200 kilometers (120 miles) wide near Cape Cod, but it narrows offshore. The fires are under cloud and just beyond the upper edge of the image, but the St. Lawrence River and Quebec are visible.

On May 30, the Canadian Interagency Fire Center reported 54 fires in Quebec, eight of which were burning out of control. As of June 1, at least 1,300 people had been evacuated from communities threatened by the fires, reported the Canadian Broadcasting Corporation. The smoke brought air quality to unhealthy levels in the province of Quebec and throughout much of New England on May 31.