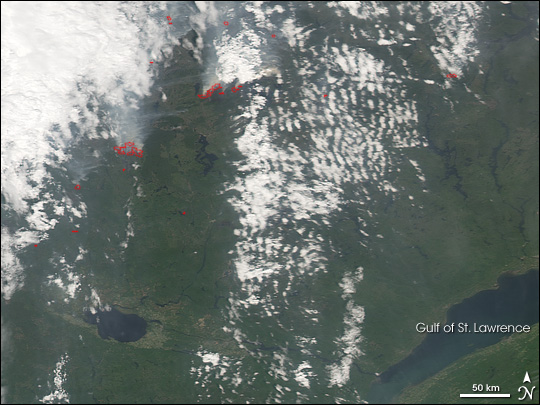 North of the St. Lawrence River in eastern Canada, numerous forest fires were burning across north-central Quebec province on June 19, 2007, when the Moderate Resolution Imaging Spectroradiometer (MODIS) on NASA’s Aqua satellite passed overhead and captured this image. Places where MODIS detected actively burning fires are outlined in red. Thick smoke billows north in the scene; in previous days, the smoke spread across a wide region of the province, southward into the United States, and out over the Atlantic.

Quebec is having a more-active-than normal fire season so far this summer. As of June 20, reports from the Canadian Interagency Forest Fire Centre showed that the number of fires in the province so far this summer exceeded the 20-year average by 175 fires, and the total area burned (273,153 hectares; or 674,973 acres) was more than 4.5 times the 20-year average. A total open fire ban was in place for campers and other outdoor tourists in forested areas north of the St. Lawrence, according to montrealgazette.com.

Fires in Russia and Mongolia

Large, smoky fires were burning in the forested mountains of Russia’s Buryatia region and Mongolia’s Belenge province on May 21, 2009. 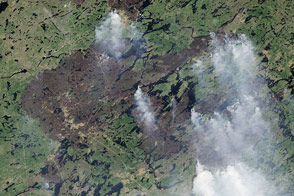