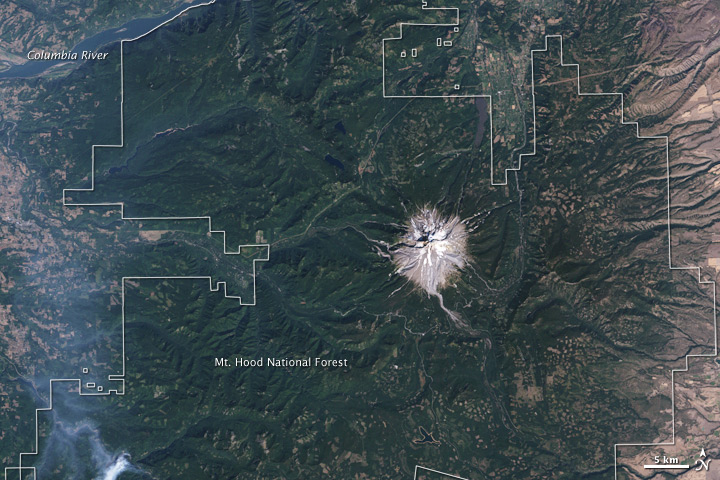 Reaching a height of 3,426 meters (11,239 feet), Mt. Hood is not only Oregon’s tallest peak, but also one of the region’s most accessible. The snow-capped peak provides a dramatic backdrop to the city of Portland, some 20 miles (30 kilometers) away. During the summer, backpackers flock to the volcano to hike the trails, pick berries, and gather mushrooms. During the winter, skiers take advantage of the volcano’s steep slopes.

On September 24, 2002, the Enhanced Thematic Mapper Plus on NASA’s Landsat 7 satellite captured this natural-color image of part of the Mt. Hood National Forest, including the volcano giving the park its name. (Forest boundaries are outlined in white.) A carpet of deep green covers most of the rugged landscape, but patches of bare or sparsely vegetated ground occur around the fringes of this image. Part of the Columbia River appears in the upper left corner. Snow persists on Mt. Hood’s summit, even at the end of summer, and old lava flows leave rivulets of rock running deep into the surrounding forest. (For a detailed view of the summit, see the astronaut photograph of Mt. Hood taken August 5, 2009.)

Mt. Hood is a stratovolcano: a steep-sloped, conical structure composed of alternating layers of hardened lava, solidified ash, and rocks thrown out by earlier eruptions. Except for some minor eruptive activity in the mid-nineteenth century, the volcano has been inactive since formal records began in the 1820s. Geologists estimate, however, that Mt. Hood has experienced bursts of eruptive activity in the past 15,000 years. Shaped both by volcanism and glaciers, Mt. Hood is part of the Cascade Range, a belt of volcanoes running through the Pacific Northwest.

Acquired September 24, 2002, this natural-color image shows part of Mt. Hood National Forest, including the volcanic peak that gave the area its name. Park boundaries are outlined in white.