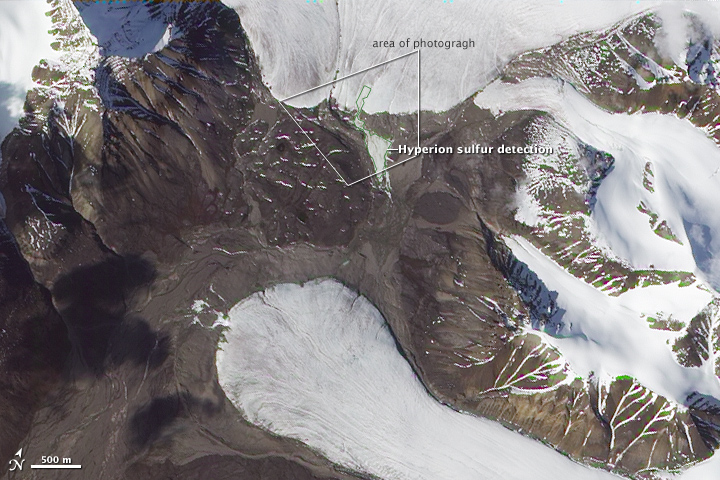 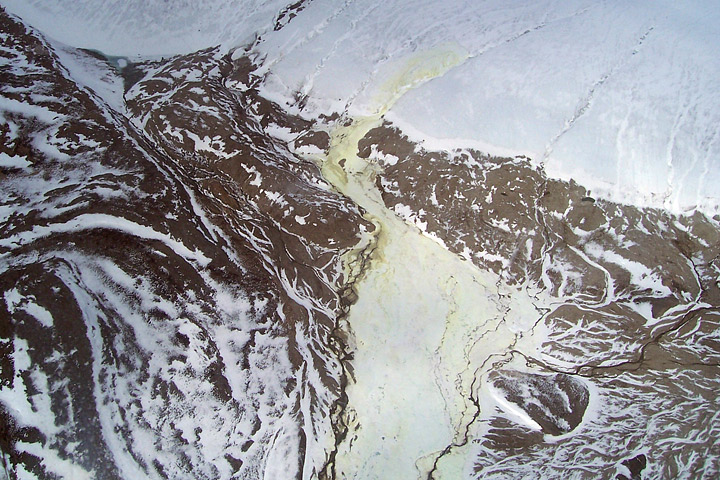 High in the Canadian Arctic is a glacier-carved valley that is like none other on Earth. Borup Fiord Pass on Ellesmere Island, shown in the top image, is the only known place where sulfur from a natural spring is deposited over ice. The sulfur leaves a pale yellow stain that almost seems to glow in the lower image, a photo taken from a helicopter in July 2006.

The top image is a natural-color satellite view of the spring, acquired by the Advanced Land Imager (ALI) on NASA’s EO-1 satellite on July 6, 2006. Though the sulfur stain is not visible at this scale in photo-like images, another sensor on the satellite, Hyperion, makes measurements in hundreds of wavelengths of light that are invisible to our eyes. Using this hyperspectral data, scientists have mapped the location of sulfur deposits on the ice surface (green outline).

The study of the Arctic sulfur spring is more than a mere curiosity; what scientists learn from it may help us find life elsewhere in the solar system. Near the top of the short list of places in our solar system that might harbor extraterrestrial life is Jupiter’s rocky moon Europa. Smaller than our moon, Europa is covered in water ice that might conceal an ocean of liquid water. Liquid water is a key ingredient for life.

If Europa has an ocean, could there be life in it? Clues could come from dark, non-ice deposits that have been detected on Europa’s icy surface. The dark deposits may be seeping up from the ocean through cracks in the ice, and observations from the Galileo spacecraft suggest that the dark deposits may contain sulfur. Are the deposits on Europa’s ice similar to the one known sulfur deposit over ice on Earth?

Scientists at NASA’s Jet Propulsion Laboratory along with colleagues from other organizations used Hyperion data to measure the abundance of elemental sulfur in Borup Pass. All matter radiates energy with a “fingerprint” unique to each chemical element. By measuring these energy fingerprints in Hyperion data, the group estimated the abundance of sulfur and other deposits at the spring.

They also measured the energy fingerprints with a more detailed detector on the ground and took samples of the deposit to analyze concentrations in the lab. Though not perfect, the three types of measurements aligned fairly well. This means that an orbiting sensor like Hyperion could be used to identify chemicals in Europa’s non-ice deposits that may be a sign of extraterrestrial microbial life.

A natural-color satellite image and an aerial photograph show a unique glacial valley in the Canadian Arctic, where sulfur deposits on the ice may give scientists insights into how to search for extraterrestrial life.