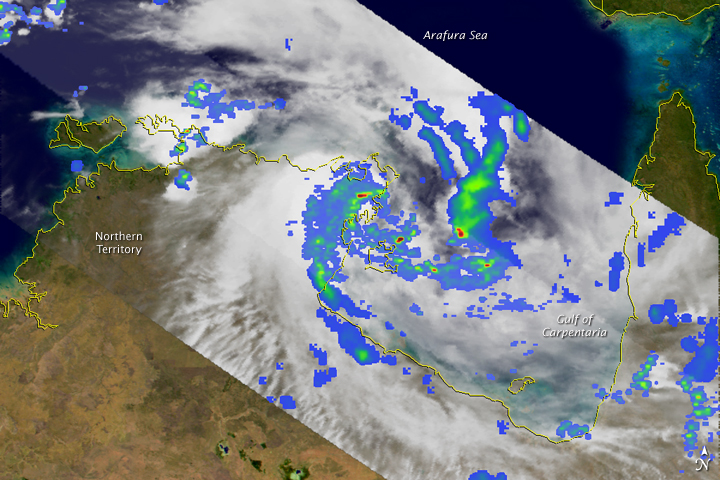 Having been hit by two tropical cyclones so far in Australia’s 2010 cyclone season, Queensland had been the center of tropical cyclone activity, but with the arrival of Tropical Cyclone Paul on March 28, it was the Northern Territory’s turn to experience heavy rains and gusty winds. This image, made from data collected by the Tropical Rainfall Measuring Mission (TRMM) satellite, shows Cyclone Paul at 6:38 p.m. Australian CST on March 28, 2010, just as the center of the storm was passing over the northeast coast of Northern Territory.

The image shows the pattern of rain inside the storm. Although Paul does not have a visible eye, the center of the storm’s circulation is clearly evident in the rain pattern over the coast (white circular area without rain). The center is bordered by a band of moderate intensity rain to the northwest (green arc along the coast) and surrounded by outer rainbands that spiral inwards to the south and east (blue and green arcs indicating light to moderate rain, respectively). Embedded within the rainbands are occasional areas of heavy rain (red areas).

Paul originated from a low-pressure circulation embedded within the monsoon trough over the Arufura Sea between the northern coast of Australia and New Guinea. As the circulation drifted southward towards northern Australia it intensified slowly and became a Category 1 cyclone on the evening of March 28th, 2010, when the center was over the northeast coast of the Northern Territory. The storm brought wind gusts of up to 110 kilometers per hour (about 70 miles per hour) to the Northern Territory, making it equivalent to a tropical storm on the U.S. Saffir-Simpson scale.

Despite Paul’s proximity to land, it was able to intensify into a Category 2 cyclone (equivalent to a minimal Category 1 hurricane) with wind gusts of up to 140 km/hr (85 mph) by March 29. Paul was hovering over land along the coast and was expected to weaken slowly. However, some forecasts predicted that the storm could eventually re-emerge over the very warm waters of the Gulf of Carpentaria and re-intensify.

Since its launch in 1997, the TRMM has served as a valuable platform for monitoring tropical cyclones using its unique combination of active radar and passive microwave sensors. In this image, rain rates in the center of the swath are from the TRMM Precipitation Radar, the only space-borne precipitation radar of its kind, while those in the outer portion are from the TRMM Microwave Imager. The rain rates are overlaid on infrared data from the TRMM Visible Infrared Scanner. TRMM is a joint mission between NASA and the Japanese space agency, JAXA.