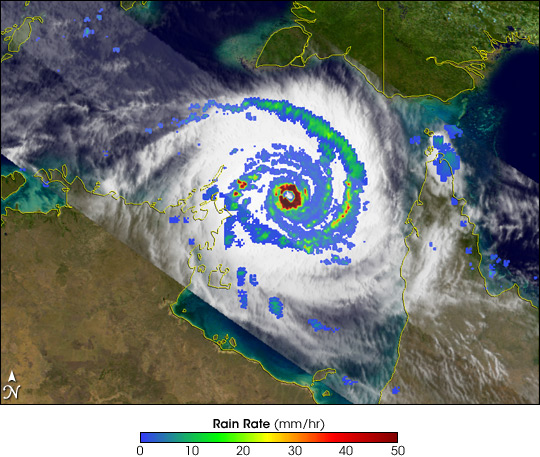 Cyclone Monica became the strongest storm of the 2006 Australian cyclone season with wind gusts reaching 350 kilometers per hour (215 miles per hour) as reported by the Australian Bureau of Meteorology’s Cyclone Warning Centre. The Category 5 cyclone hit along the sparsely populated coastline of the Northern Territory, sparing the city of Darwin. Monica originated in the Coral Sea below the southeastern tip of Papua New Guinea, becoming a minimal tropical storm on April 17, 2006. The storm tracked due west towards the Cape York Peninsula in Queensland, where it came ashore just south of Lockart River on the afternoon of April 19 as a Category 3 cyclone. Monica weakened as it crossed the peninsula, but when it reached the warm waters of the Gulf of Carpentaria on the other side, it re-organized and re-intensified.

The image above shows Cyclone Monica during this re-intensification. The visualization combines data from several different instruments from the Tropical Rainfall Measuring Mission (TRMM) satellite, which observed the storm at 16:08 UTC on April 22, 2006 (1:38 a.m., April 23, Australian CST). With an active radar and a passive microwave sensor, TRMM can peer into the core of these storms and relay important details on storm structure and location to forecasters. In this case, TRMM showed a pattern of very heavy rain (red) forming an intense symmetric eyewall around a small, complete eye with tightly curved rainbands spiraling into the center—the signature of a mature, intense tropical cyclone. Rain rates in the center swath are from the TRMM Precipitation Radar, and rain rates in the outer swath are from the TRMM Microwave Imager. The rain rates are overlaid on infrared data from the TRMM Visible Infrared Scanner.

At the time of this TRMM overpass, Monica’s sustained winds were estimated to be 230 kilometers/hour (144 mph) or equivalent to a Category 4 hurricane on the Saffir-Simpson scale. Soon after these images were taken, Monica reached Category 5 status with sustained winds estimated at 285 km/hr (178 mph). The cyclone tracked westward, skirting the northern coastline of Australia before coming ashore west of Maningrida in the Northern Territory just after 8 p.m. local time. The storm quickly lost strength as it moved inland and passed by the main population center of Darwin.

TRMM is a joint mission between NASA and the Japanese space agency, JAXA. TRMM made several passes over Monica, during both the early and the mature stages of the storm. Since its launch in 1997, TRMM has provided valuable information on tropical storms. With an active radar and a passive microwave sensor, TRMM can peer into the core of these storms and relay details on storm structure and location to forecasters.

Tropical Cyclone Monica formed off the northeastern coast of Australia on April 17, 2006. This is the same general area where Cyclone Larry formed a month earlier.

Cyclone Nargis passed over Burma (Myanmar) after having formed in the Bay of Bengal. At one point, Nargis was a Category 4 cyclone, with sustained winds of 210 kilometers per hour (130 miles per hour). The typhoon lost strength before coming ashore on May 2 as a Category 3/4 storm, but it still carried very powerful winds and heavy rain when it struck the low-lying coastal plains, causing severe damage. News reports cited a death toll of 10,000 people, with thousands more missing, as of May 5.