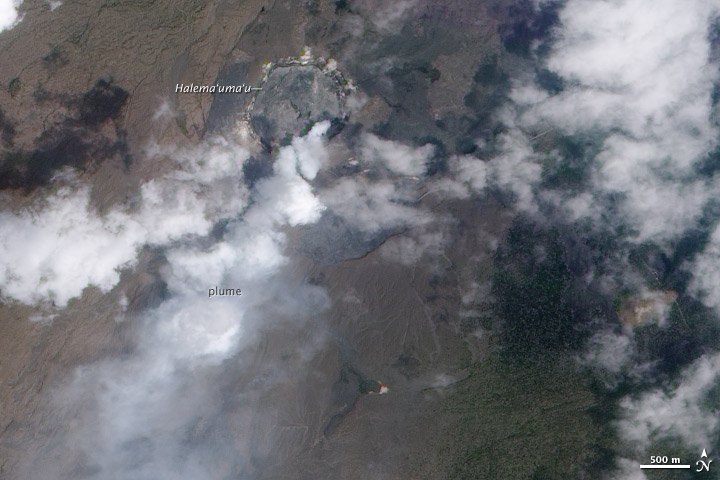 A lava-filled pit set inside Kilauea’s Halema‘uma‘u Crater continues to emit a plume of steam, ash, and sulfur dioxide. The pit, located in the southwestern wall of Halema‘uma‘u (itself a crater in the larger Kilauea Caldera) first opened on March 19, 2008. Volcanic emissions have continued almost uninterrupted since, punctuated occasionally by violent explosions of ash and fragments of rock torn from the crater walls. On September 5, 2008, scientists at the Hawaii Volcano Observatory (HVO) discovered a lava lake inside the pit.

The plume’s bluish tinge distinguishes it from the clouds that cover much of Kilauea’s summit. The blue color is caused by tiny droplets of sulfuric acid, the product of chemical reactions that occur when sulfur dioxide mixes with air. The HVO reported that the ash in the plume was primarily composed of spatter, indicating it was derived from fresh lava.