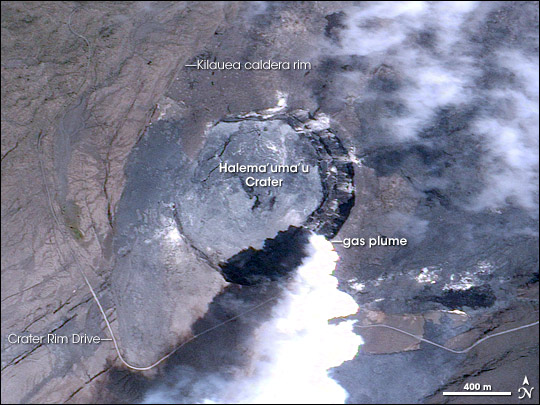 On April 2, 2008, the U.S. Geological Survey’s Hawaiian Volcano Observatory was cautioning residents downwind of Kilauea Volcano that the Halema’uma’u vent in the summit crater was emitting hazardous amounts of sulfur dioxide. The levels of the gas were high enough that even people without pre-existing respiratory problems could be affected, and the National Park Service closed Crater Rim Drive in the area of the summit until further notice.

This image of the summit of Kilauea Volcano shows a white plume streaming south-southwest from the active vent on March 29, 2008. The image is from the Formosat-2 satellite, operated by Taiwan’s National Space Organization. Throughout the eruption, which began on March 19, the emissions have alternated between gray-brown plumes dominated by ash and white plumes of gas, including sulfur dioxide, and steam. (Some rock dust and ash continued to fall nearby during the “white plume” phases.)

Kilauea occupies the southeastern edge of the Big Island of Hawaii. Although Kilauea has been erupting lava continuously since the early 1980s, explosive, ash-producing eruptions are rare. Before the March 2008 event, the last explosive eruption from the summit crater was in 1924.