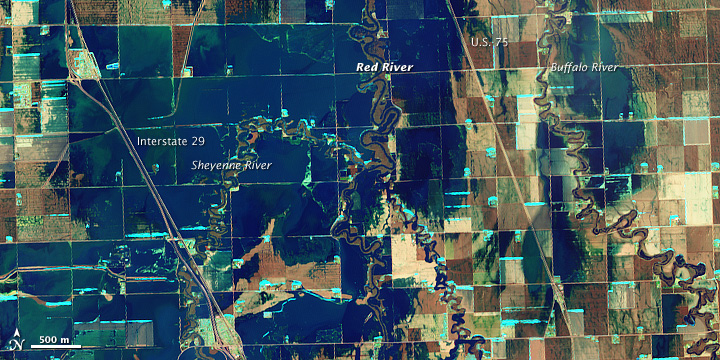 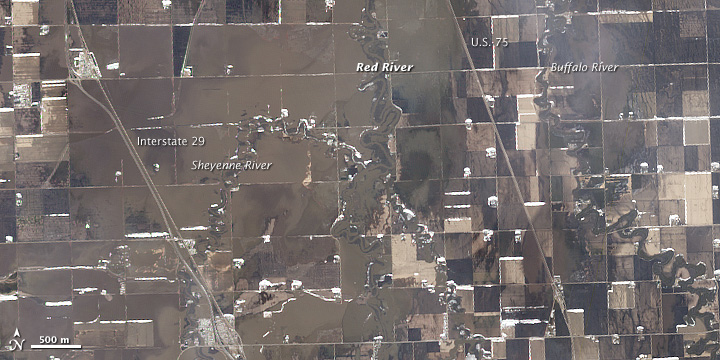 On March 21, 2010, the Red River crested at 36.99 feet (11.27 meters), according to the National Weather Service. The New York Times reported that the river’s crest was 1 foot (0.3 meters) below predictions and 4 feet (1 meter) below 2009’s record crest. A cold front passing through the area on March 19, 2010, slowed the rate of snowmelt feeding local rivers. That, combined with sandbags and dikes, spared the metropolitan area of Fargo, North Dakota, from serious flooding. North of town, however, agricultural fields and roads flooded.

The Advanced Land Imager (ALI) on NASA’s Earth Observing-1 (EO-1) satellite captured these images of fields north of Fargo on March 21, 2010. The Sheyenne, Red, and Buffalo Rivers all flow through the area pictured here. The false-color image (top) combines visible and infrared light to make standing water (dark blue) more obvious. Fallow fields, bare ground, and paved surfaces appear in shades of brown, while vegetation is green. Cyan strips along the edges of fields and rivers may be patches of snow and ice. In the natural-color image (bottom), muddy water and fallow fields blend together.

According to The New York Times, flooding in rural areas around Fargo resulted primarily from the Red River’s failure to absorb water from the tributaries feeding it. Much of the standing water apparent in this image occurs around the Sheyenne and Buffalo Rivers. Overflowing tributaries left several inches of standing water in agricultural fields and on highways. About 10 miles (16 kilometers) north of Fargo, flooding forced the closure of Interstate 29.

Rain, snowmelt, and ice jams backed up rivers and flooded agricultural fields throughout much of the Dakotas in March 2010.