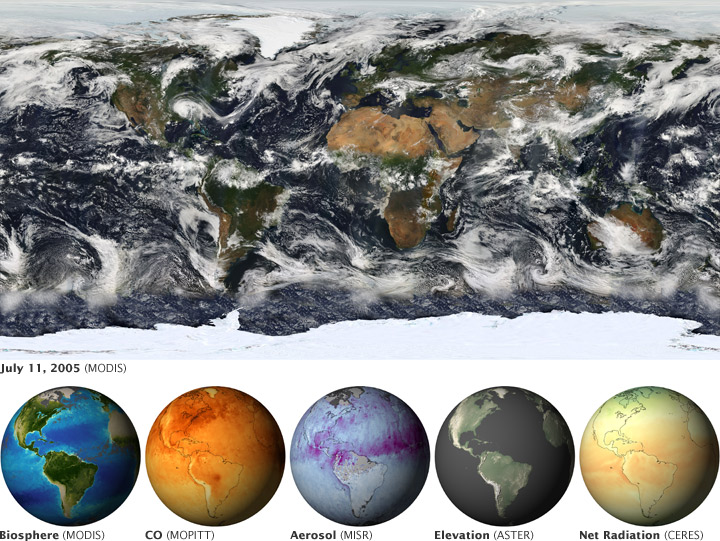 On February 24, 2000, after two months of post-launch testing, sensors on NASA’s Terra satellite began opening their shutters and making their first observations. The mission ushered in a decade of observations from NASA’s Earth Observing System, a coordinated series of satellites that monitor how Earth is changing.

Among the most dramatic views the mission provides are the most detailed, photo-like views of Earth available on a daily basis. The top image is based largely on observations from the Moderate Resolution Imaging Spectroradiometer (MODIS) on July 11, 2005. Small gaps in MODIS’ coverage between overpasses, as well as Antarctica (which is in polar darkness in July), have been filled in using GOES weather satellites and the latest version of the NASA Blue Marble.)

Stunning pictures are only part of Terra’s story, however. The small globes show just a few of the Earth’s “vital signs” that Terra’s five sensors monitor. In all five globes, gray indicates no data.

NASA images by Marit Jentoft-Nilsen (image) and Robert Simmon (globes). Based on data from the MODIS, MOPITT, MISR, ASTER, and CERES science teams. Caption by Rebecca Lindsey and Holli Riebeek.

This collection of image highlights several of the Earth’s vital signs monitored by NASA’s Terra mission, which began observing our planet a decade ago this month.