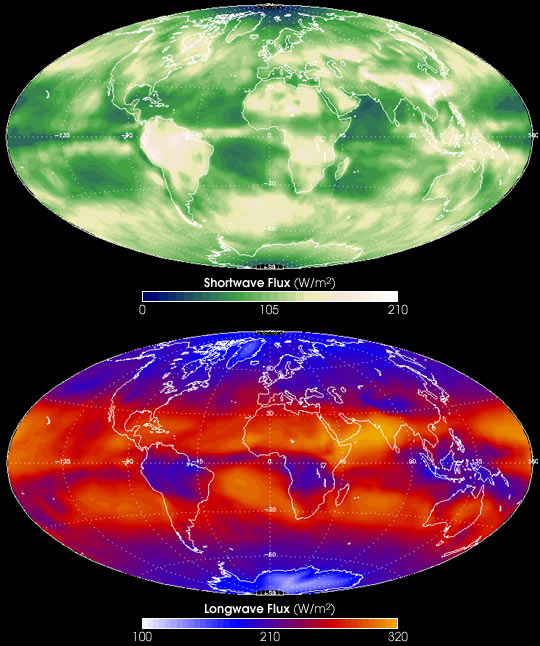 These are the Terra mission's first global snapshots of the Earth's climate system composited over a one-month period. These measurements were acquired by NASA's Clouds and the Earth's Radiant Energy System, or CERES, sensors during March 2000. The top image shows shortwave radiation (sunlight) that is reflected back into space by our planet, averaged over the entire month, and the bottom image shows longwave radiation (heat) that is emitted by the Earth back into space.

CERES measures the balance of solar energy received by the Earth and the energy reflected and emitted back into space. Understanding the energy coming into and out of the Earth system is critical for assessing whether scientists' models of global climate change are making accurate predictions. This pair of images is the Terra mission's first in what will be an ongoing series of such measurements of our planet's changing climate system.

In the top image, the white and tan pixels show where the Earth reflected more sunlight back into space during that month, either due to reflection by bright land surfaces such as deserts, or because of the presence of clouds. Green and bluish pixels show where less sunlight was reflected. In the bottom image, orange and red pixels show where more heat was emitted back into space, while blue and whitish pixels show where less heat is escaping. The blue, cold, regions over Brazil, south central Africa, and the Indonesian subcontinent, are due to the presence of high thick clouds in the tropical atmosphere. These same regions have enhanced shortwave reflection as a result of thick clouds, as seen in the upper image.

Averaged over the entire globe on an annual basis, the Earth system neither stores nor emits more energy than it receives from the sun. However, on a regional and seasonal bases, the Earth is far from radiative equilibrium, absorbing more energy (on average) in the tropics and less energy in polar regions, thereby driving the circulation of the Earth's atmosphere and oceans. Does this pattern of imbalances vary from year to year due to natural (El Niño) or man-made changes in the composition of the Earth's atmosphere? Is the global distribution of cloudiness changing as a consequence of man's activities? These are outstanding questions that CERES will enable Earth scientists to answer for the first time.

The Terra mission to measure changes in the Earth's climate system began on February 24, 2000, when its sensors first began acquiring data. The CERES sensor is managed at NASA's Langley Research Center in Hampton, VA. The Terra mission is managed at NASA's Goddard Space Flight Center in Greenbelt, MD. CERES data are available from the NASA LaRC DAAC.