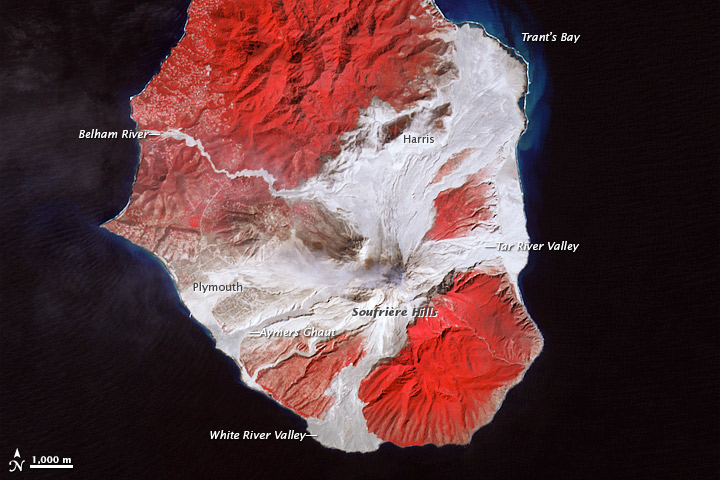 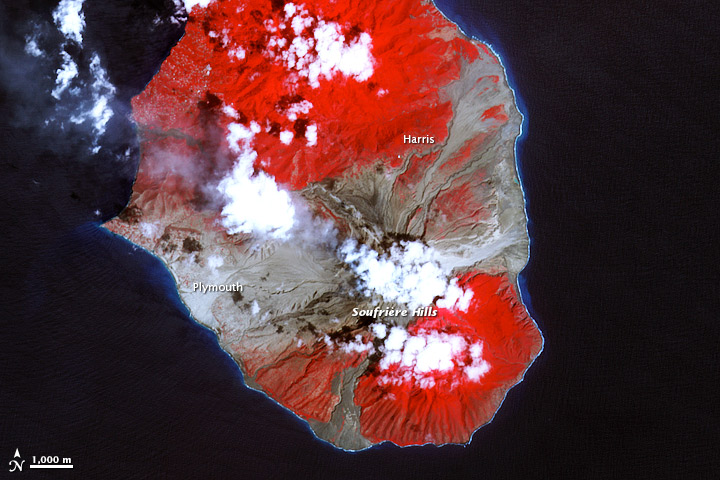 A massive eruption of Montserrat’s Soufrière Hills Volcano covered large portions of the island in debris. The eruption was triggered by a collapse of Soufrière Hills’ summit lava dome on February 11, 2010. Pyroclastic flows raced down the northern flank of the volcano, leveling trees and destroying buildings in the village of Harris, which was abandoned after Soufrière Hills became active in 1995. The Montserrat Volcano Observatory reported that some flows, about 15 meters (49 feet) thick, reached the sea at Trant’s Bay. These flows extended the island’s coastline up to 650 meters (2,100 feet).

These false-color satellite images show the southern half of Montserrat before and after the dome collapse. The top image shows Montserrat on February 21, 2010, just 10 days after the event. For comparison, the bottom image shows the same area on March 17, 2007. Red areas are vegetated, clouds are white, blue/black areas are ocean water, and gray areas are covered by flow deposits. Fresh deposits tend to be lighter than older deposits.

On February 21, the drainages leading down from Soufrière Hills, including the White River Valley, the Tar River Valley, and the Belham River Valley, were filled with fresh debris. According to the Montserrat Volcano Observatory, pyroclastic flows reached the sea through Aymers Ghaut on January 18, 2010, and flows entered the sea near Plymouth on February 5, 2010.

A massive eruption of Montserrat’s Soufrière Hills Volcano covered large portions of the island in debris in mid-February 2010.

Ash swirled around the Caribbean volcano Soufrièr Hills in January 2010.