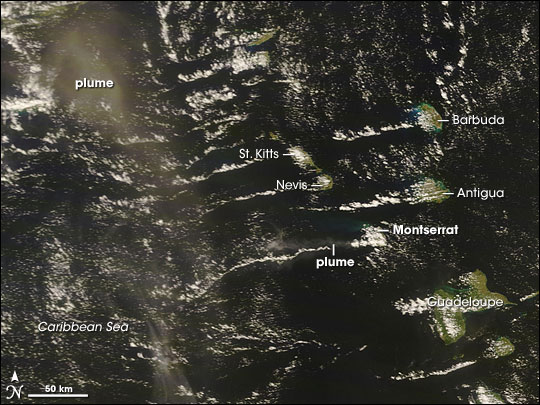 At 11:27 p.m. local time on July 28, 2008, the Soufriere Hills Volcano on the Caribbean island of Montserrat experienced a partial dome collapse. Explosions from the dome accompanied the event, and the resulting volcanic ash column reached an estimated 12 kilometers (40,000 feet) in altitude. No injuries were reported, but nearby residents temporarily evacuated the area. Volcanic material fell on the abandoned city of Plymouth, Montserrat’s former capital, which had been destroyed by earlier eruptions.

The Moderate Resolution Imaging Spectroradiometer (MODIS) on NASA’s Terra satellite acquired this image at 10:20 a.m. local time (14:20 UTC) on July 29, 2008, roughly 11 hours after the dome collapse. Small but plentiful clouds dot this picture, partially obscuring some features, including the island of Montserrat itself. Despite the clouds, however, evidence of the volcano’s recent activity still appears. A thin, faint plume blows westward from Montserrat over the Caribbean Sea. A much larger plume appears in the northwest. This larger plume likely contains material released by the dome collapse hours earlier.

Soufriere Hills is a stratovolcano—a steep-sloped volcano comprised of alternating layers of hardened lava, solidified ash, and rocks ejected by previous eruptions. Aside from a seventeenth-century eruption, the volcano was mostly quiet during historical times. The volcano’s activity heightened in 1995, forcing the temporary evacuation of the southern half of Montserrat and the permanent abandonment of the capital city of Plymouth.

Soufriere Hills Volcano on the Caribbean island of Montserrat released a plume of ash and steam in late July 2008. On July 28, the volcano's dome partially collapsed, sending an ash column 12 kilometers skyward.