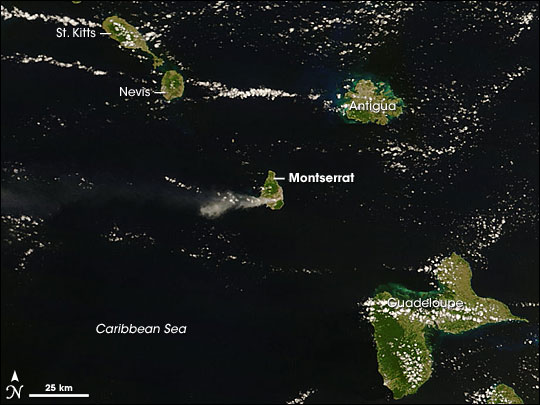 Soufriere Hills Volcano on the Caribbean island of Montserrat released a plume of ash and steam in late July 2008. According to the Montserrat Volcano Observatory (MVO), seismic activity at the volcano increased, and a short series of eruptions occurred on the morning of July 27, 2008. The activity produced ash fall but no pyroclastic flows (avalanches of rock, ash, and gas).

The Moderate Resolution Imaging Spectroradiometer (MODIS) on NASA’s Terra satellite took this picture on July 27, 2008. This image shows a dense plume blowing away from Montserrat over the Caribbean Sea. Barely visible, a much thinner, fainter plume also appears, extending farther to the west. Aside from the volcanic plumes and dots of clouds, the skies in this image are clear.

Soufriere Hills is a stratovolcano—a steep-sloped volcano comprised of alternating layers of hardened lava, solidified ash, and rocks ejected by previous eruptions. During recorded history, the volcano was largely inactive except for a seventeenth-century eruption. In 1995, however, heightened activity forced the evacuation of southern Montserrat.

Soufriere Hills Volcano on the Caribbean island of Montserrat released a plume of ash and steam in late July 2008. On July 28, the volcano's dome partially collapsed, sending an ash column 12 kilometers skyward.