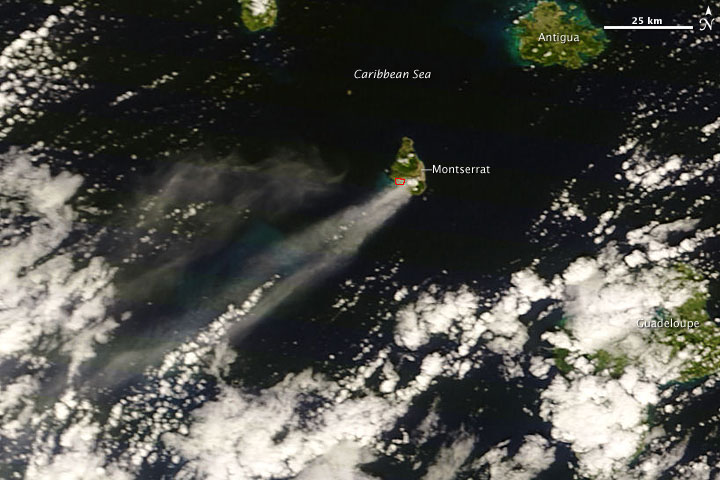 The Soufriere Hills volcano on the Caribbean island of Montserrat remained active in late November and early December 2008. Although activity on the volcano’s lava dome was not exceptional between November 21 and 28, the dome continued to release steam from multiple fissures. Late in the day on December 2, 2008, without warning, an explosion occurred on the west side of the lava dome, according to the Montserrat Volcano Observatory and the Smithsonian Institution. A pyroclastic flow consisting of gas, ash, and rocks passed through the city of Plymouth—setting some buildings on fire—and continued to the coast. Ash plumes from the volcano spawned their own lightning strikes.

On December 4, 2008, the Moderate Resolution Imaging Spectroradiometer (MODIS) on NASA’s Terra satellite captured this image of the plume wafting toward the southwest. The red outline on the island of Montserrat is a hotspot where the satellite has detected unusually warm surface temperatures, consistent with an active volcanic summit.

Soufriere Hills is a stratovolcano composed of alternating layers of hardened lava, solidified ash, and rocks ejected by previous eruptions. After the seventeenth century, the volcano experienced no recorded eruptions until 1995, when a series of major eruptions eventually destroyed the island’s capital city, Plymouth.