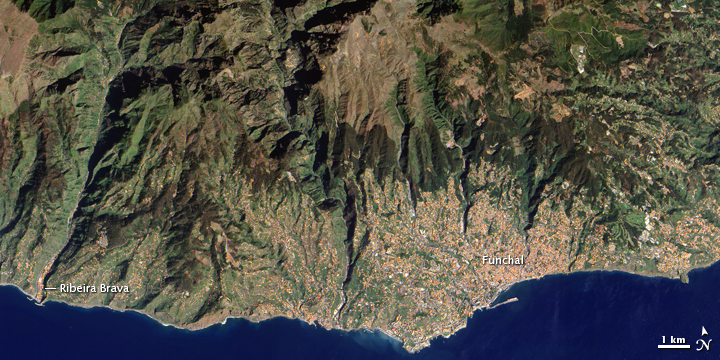 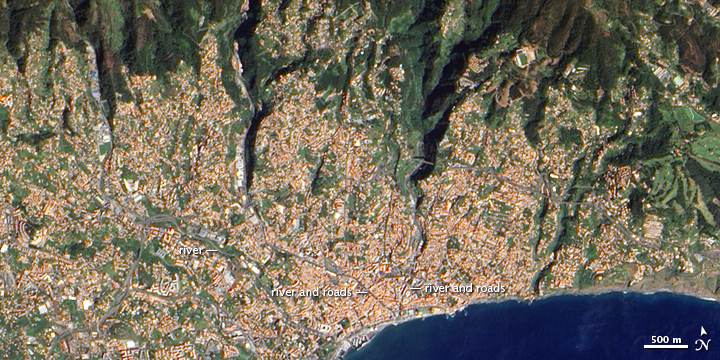 On February 20, 2010, torrential rain inundated the Portuguese island of Madeira. Water, rocks, and mud gushed down the slopes of the steep-sided island and though the streets of Funchal and other cities on the island’s populated southern coast. When the floods abated, at least 42 were dead, with 13 still missing as of February 23, said news reports. This image, taken by the Advanced Land Imager on NASA’s EO-1 satellite on March 7, 2007, illustrates how the island’s topography contributed to the disaster.

Two topographic features characterize this part of the Madeiran landscape: steep mountains and deep ravines. Both landforms are evident in the top image, which provides a wide view of the communities impacted by flooding, and both were instrumental in bringing about the disaster. The island of Madeira rises sharply out of the Atlantic Ocean, its highest peak reaching an altitude of 1,862 meters (6,100 feet). The sheer steepness of the terrain ensures that water will pour down the mountains to the coast during extreme rainstorms, such as the one that hit the island on February 20; occasional mudslides on such steep slopes are inevitable.

Deep ravines define the path the water routinely takes off the island. In shadow in the morning sunlight, the ravines are like dark wrinkles radiating from the center of the island in this image. The cities, the color of terra cotta roof tiles, are built mostly around the ravines in this region with two notable exceptions. The small town of Ribeira Brava sits at the mouth of a large ravine that extends from the heart of the island. The town experienced deadly flooding and mudslides on February 20.

The second exception is Funchal, the island’s capital, which is shown in greater detail in the lower image. Three rivers run from the mountains into the city. The deep ravines that bring two of the rivers into the city are evident in the image. The rivers are lined with some of the city’s primary roads, and they come together in a “v” near the harbor. These rivers acted like a funnel, bringing the flood into the heart of the city before burying the harbor. Funchal also experienced severe damage in the upper parts of the city, where floods washed away cars and caused landslides on the steep mountain slopes.