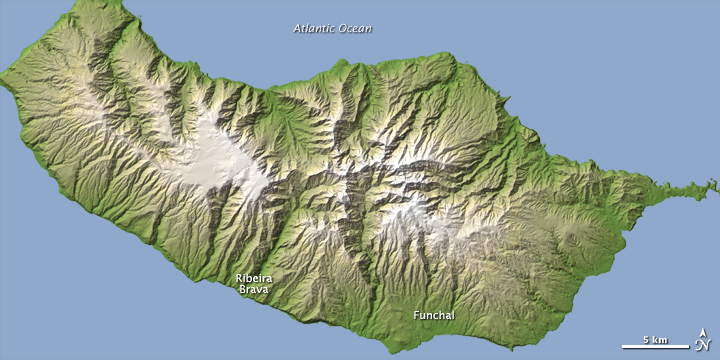 Looking at this topographic map, it is easy to see why Madeira’s capital city, Funchal, is situated where it is. Funchal covers the gentlest slopes and largest area of low-elevation ground on the rugged island. The grade of the slopes can be judged by how rapidly the color changes from green near sea level to tan and then white at the highest points on the island. Along the northern shore, the change happens rapidly, revealing the steep mountains and high sea cliffs that compose much of that shoreline. In the south, however, the descent to the shore takes longer. These relatively gentle slopes (gentle only compared to other locations on the island) provide the most feasible location for a city on Madeira.

The city center sits on slightly sloped ground, while outer suburbs perch on the mountain slopes around the city. On February 19-20, 2010, when heavy rain poured down on the island, the high suburbs suffered mudslides and floods. As this map illustrates, the slopes around Funchal surround the city in a semicircle, so water flowing down the mountains was concentrated in the bowl where the city is located. The devastating floods killed at least 42 with 18 still missing as of February 23, according to the government of Madeira.

The other community damaged by extreme flooding in February 2010 is Ribeira Brava, to the west of Funchal. This small town sits at the base of a ravine. Indeed, literally translated, the name means “rough stream or riverside.” The topographic map shows clearly how rain falling on the mountains on either side of the deep ravine would naturally converge near the town.