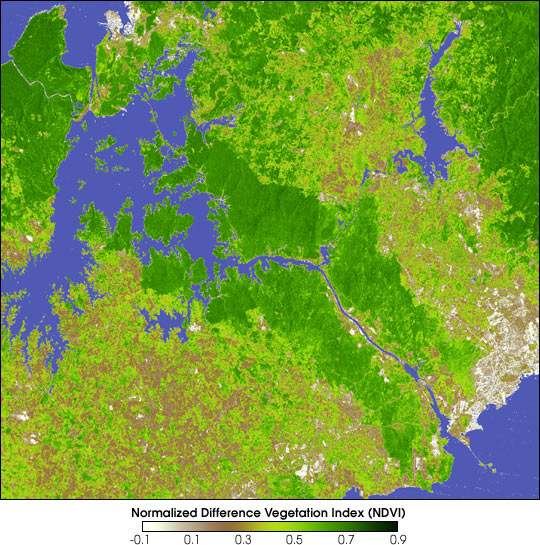 Tropical rainforests are warm, 24-27°C (75-80°F) year round, because they are located near the equator. Rainforests live up to their name—they receive at least 2,000 mm (80 inches) of rain every year. While they cover less than seven percent of the Earth’s surface, rainforests contain about half of the plant and animal species on the planet. The rainforests of Panama, in particular, are some of the world’s most biologically diverse areas. Chagres National Park, situated east of Gatun Lake and the northern half of Panama Canal, has 1,185 species of plants, 130 of which are unique to that area. Panama’s rainforests are home to many mammals that migrated from both North and South America. Among these species are jaguars, tapirs, deer, sloths, anteaters, and armadillos. There are also 650 species of birds and 93 amphibian species in the Panama Canal watershed.

The false-color Landsat image above is a map of the of the “greenness” of the plant canopy across the greater Panama Canal watershed. Such a map is produced by measuring how much visible and near-infrared light is reflected by the surface. By taking a ratio of the measures of these two wavelengths of light, scientists derive an index value generally ranging from -0.1 to 0.9, called “Normalized Difference Vegetation Index,” or NDVI. Areas reflecting low levels of visible light and high values of infrared light are likely covered by green, leafy vegetation. In the scene, the darker green the area, the more green vegetation is present.

The rainforests of Panama stand out clearly as the dark green swaths straddling either side of the Panama Canal—the thin blue ribbon running from the northwest toward the southeast in this image. These forests not only harbor a very diverse community of plants and animals, they also help reduce erosion and sedimentation to the canal. The light green and brown hues in the scene are more sparsely vegetated pastures and croplands. The white pixels show areas of human development. This image was acquired in March 2000, during Panama’s annual dry season.

Gatun Lake is the large inland body of water in the upper left corner. Gatun is a freshwater lake. It serves as a reservoir, providing water to operate the locks placed at intervals along the Panama Canal flowing to the southeast. More than half of the route of the Panama Canal runs through this Gatun Lake, which is the stretch of the journey that is highest in elevation. (This SRTM image shows a detailed elevation map of Panama.) The canal empties into the Pacific Ocean just south of Panama City, the capital (the white cluster of pixels at bottom right).

The largest island in Gatun Lake is Barro Colorado Island, which has been a protected nature reserve since 1923. The island is the site of the Smithsonian Tropical Research Institute, which will host the JASON Project’s Expedition XV (“Rainforests at the Crossroads”). Students, teachers, and scientists will study the rainforest ecosystem there while the expedition is televised live to the international network of participating schools. In support of the expedition, an interactive lesson featuring the use of NASA satellite remote sensing data is now available on the Earth Observatory.